Boko Haram are terrorists????? US finally recognises this

Some who have long paid attention to the terrorism threats globally, have pointed to Boko Haram as a major force.  For an overview, start at War On Terror News here. That's from 2011, but not the first time that WOTN reminded us all of the global threat of such groups.

Now, late to the party as always, the US State Department has officially designated Boko Haram as a 'terror group.'

Long, long overdue. And what exactly took them so long? "US designates 2 Nigerian networks as terror groups," by Deb Riechmann for the Associated Press, November 14:


WASHINGTON (AP) — Lawmakers who had long pushed for US action against Nigerian Islamic extremists welcomed the State Department’s decision on Wednesday to designate two militant groups as foreign terrorist organizations blamed for the deaths of thousands of people in Africa’s most populous nation.

Ansaru and Boko Haram, which have links to al-Qaeda, are waging a brutal campaign against military, government and civilian targets, including Christians like Habila Adamu, who delivered emotional congressional testimony about being shot in the face because he refused to renounce his faith.

“I told them ‘I’m ready to die as a Christian.’ Before I closed my mouth, one of them fired at me with an AK-47. It passed through my nose,” Adamu said, holding up photographs taken of the entry wound on his nose and exit wound on the side of his neck. “I fell down. … Blood is rushing everywhere. One of them followed me, stepped on me two times to confirm whether I am still alive or I am dead.”... 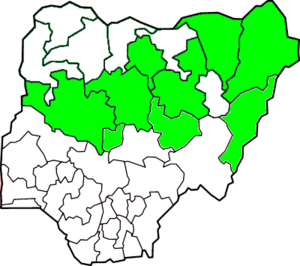 The department also designated Ansaru, a Boko Haram splinter faction, as a foreign terrorist organization. The United States says the designation would help the Nigerian government in fighting the growing threat of domestic Islamist terrorism.

The designation makes it possible for the United States to freeze the assets of the organization and its leaders and members, impose travel bans on members of the group, and prohibit Americans from offering material support to the organization.

The United States says the designation would help the Nigerian government in fighting the growing threat of domestic Islamist terrorism, but some Africa specialists argue that designating Boko Haram a terrorist organization is more likely to enhance the group’s reputation, both inside and outside Nigeria, and may help the group recruit jihadists...