It is well known that throughout history, Gurkhas have been fearless Warriors. They have fought alongside our British Troops most recently in Afghanistan, and now - like other Coalition Veterans everywhere - they are being totally screwed by the governments.

This picture was from a couple of days ago: 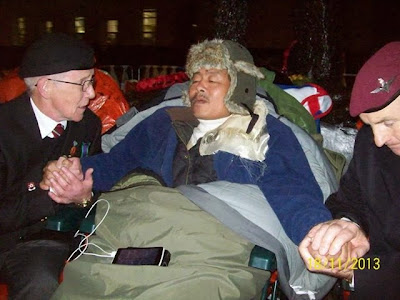 
A picture that speaks a thousand words. Two Army Veterans plead with the awe inspiring man. This is a Gurkha Veteran currently on hunger strike opposite Downing St. When this picture was taken last night it was day 12. As you can see he does not look well. We cant allow this great man to die so we need to get this story out there. All they want is equal pensions so they can look after their families. Thats the least we owe them as they have fought for our country alongside our Forces for 200 years. Shame on the Government for ignoring these loyal Gurkhas. Please share this picture everywhere you can think of and lets get these fantastic lads what they deserve. Thank you.

For a snapshot of the Gurkha contribution to British fighting forces there is this from 2010:

An End to the Ghurkas?

Britain faces daunting budget challenges. It currently runs a budget deficit worse than that of Greece and Chancellor of the Exchequer George Osborne has ordered the Ministry of Defense to cut its budget by between ten and twenty percent. Britain’s 69 billion dollar defense budget in 2009 is the third largest in the world, after second-place China (99 billion) and of course first-place United States (663 billion).

The most likely place for the axe to fall is an elimination of the Brigade of Gurkhas. The Gurkhas are an odd part of the British armed forces in any case. The recruits are Nepalese, not British subjects, and one reason (aside from tradition) for maintaining the Gurkas in the face of budget problems in the past was their lower cost. Retiring Gurkha soldiers returning to their homeland were paid a pension only about one third that paid retiring British nationals. A second reason was a shortage of British nationals willing to volunteer for the armed forces.

The cost differential changed last year when British actress Joanna Lumley spearheaded a public drive to allow retired Gurkhas to settle in the United Kingdom with a full pension. Fair’s fair, and in my view the reform was long overdue and is one more thing to like about Lumley, not that one is needed. It did make the Gurkha’s a bit less of a bargain, and the upsurge in British recruiting for the last few years has all but sealed their fate.

Even if Britain eliminates its Gurkha battalions, the tradition will continue. When India gained its independence, the British and Indian armies split the Gurkha regiments between them. Since then the British contingent has contracted while the Indians added a seventh regiment and numerous battalions to each of the parent units.  The Indians currently have 42,000 Gurkhas (”Gorkhas” in Indian service) under arms in forty-six battalions, a strength which dwarfs the approximately 3,500 men still in British service.

What is also well known in Britain, Canada and the US is that those governments are progressing at breakneck speed to cut their deficit budgets by massive cuts to the defence budgets: on the backs of our Veterans.  It seems that almost daily, we hear rumbling of whole units of Warriors in all three countries being thrown on the cutting room floor. The various government publicly award highest honours to our Combat Troops - the most recent Ghurka to be ceremoniously recognised for his heroics under fire.

THIS Gurkha is camped outside Number 10, Downing Street, and the government response?  David Cameron says he "will consult..."