I just LOVE these stories... 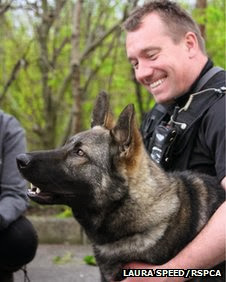 A dog rescued by the RSPCA because of fears he was being beaten by his owners has been given a new life helping to catch criminals.

The German shepherd was found living outside a Bradford house in a small, dark kennel with no food or water.

Because of his mistreatment, the dog, renamed Chance, had behavioural issues and could not be rehomed.

A West Yorkshire Police dog handler spotted him at the kennels and he was taken on and trained as a police dog.

Chance's handler PC Mick Kilburn said: "He immediately demonstrated some of the raw ability needed to become a general purpose police dog and was allocated to me, to replace my current police dog who is due to retire."

"They aren't just a tool that is used by the police, they become your work partner, friend and protector.

"I couldn't be more proud of how well Chance has done."...

Bratdog and Gabe would be so proud.