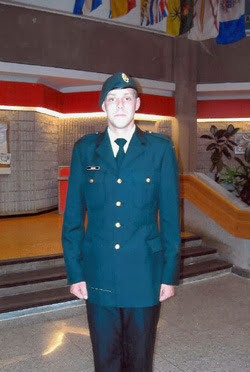 Tony Harris was a kid without a plan. His mother will tell you he was going nowhere, fast, just spinning his wheels through post-high school life in Pennfield Ridge, N.B.

“I had no direction,” says Tony Jr. “I think I always knew that I was going to join the military. But when it came time I needed a push from my Dad.”

Tony Sr., a former air force man, describes the push as more of an ultimatum. “He had no option, not with me he didn’t.”

Save for the Victoria Cross and the Star of Valour, it is the highest honour a Canadian soldier can receive. In earning it, Cpl. Harris joins an exclusive club with about 75 members, total, since it was created.

He is being honoured for his actions of Nov. 23, 2009. At the time, he was stationed at Forward Operating Base Wilson, in Panjawi District. A dusty Afghan nowhere surrounded by a vast emptiness crawling with bad guys.

On Tuesday, Tony Jr. — now Corporal Harris, and living in Edmonton — will stand before Governor General David Johnston, who will present him with the Medal of Military Valour at a ceremony in Ottawa....

I could share the full details of this Hero's selfless action here, but instead will direct you to GO read the full story here.

I will share with you this, from within the article:

Try calling him a hero, and he will try changing the subject.
“I was just doing my job.”


How blessed we are that young men such as Tony Harris continue to "just do their job".....