Iran scores a historic victory: Neda is unavailable for comment 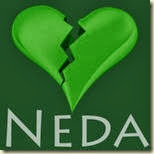 Today from the BBC:

Iran has agreed to curb some of its nuclear activities in return for about $7bn (£4.3bn) in sanctions relief, after days of intense talks in Geneva.

The deal will last for six months, while a permanent agreement is sought.

US President Barack Obama welcomed the deal, saying it would "help prevent Iran from building a nuclear weapon".

Iranian President Hassan Rouhani said Iran's right to uranium enrichment had been recognised. Israel, however, said the agreement was a "historic mistake".

In a nationwide broadcast on Sunday, President Rouhani repeated that his country would never seek a nuclear weapon He hailed the deal, saying it met one of Iran's fundamental principles.

"No matter what interpretations are given, Iran's right to enrichment has been recognised," he said....

To say that this "coup for John Kerry" is monumentally stupid, with global implications,  doesn't even come close to my reaction when I first heard this late last night. Am I the only one who noticed that again, the current US administration 'concludes' yet another 'historical agreement' under dark of night? Wonder if they left the washable red crayons at home?

Israel's Prime Minister had this to say: 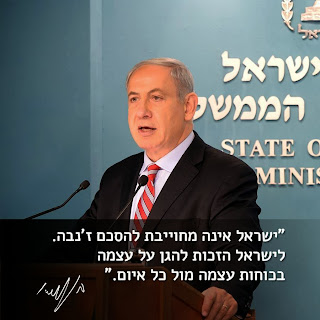 What was achieved last night in Geneva is not an historic agreement; it is an historic mistake. Israel is not bound by this agreement. The Iranian regime is committed to the destruction of Israel, and Israel has the right and the obligation to defend itself, by itself, against any threat.
Photo: Haim Zach, GPO


'Historic mistake' is absolutely right, and proves - yet again - that the MIC and his mouthpiece John Kerry are wilfully ignorant of the FACTS of history. 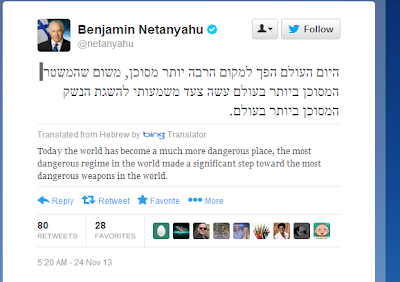 Israel knows better than anybody what any student of history should know. They live with the constant threat from Iran, who is on the record, repeatedly, as vowing to wipe Israel off the map.  Israel also knows well, as MIC et al seem determined to ignore, that appeasement of such murderous regimes as Iran, does NOT work.

From elsewhere on social media today:

"Those who fail to learn from History, are doomed to repeat it."
In 1938, after signing the Munich agreement with Adolf Hitler, British Prime Minister Neville Chamberlain declared 'peace for our time'. Yesterday in Geneva, the US and global powers signed an agreement with Iran easing sanctions for 'peace'. Israel will not allow the past to repeat itself. 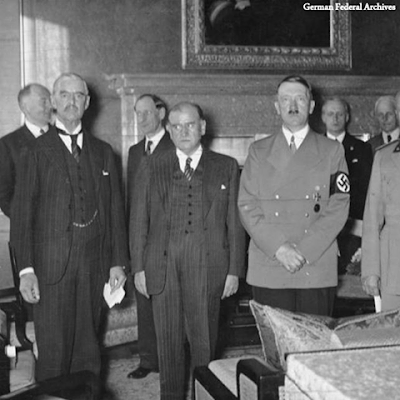 As the world msm applauds this bright new day,  I heard Kerry quoted as saying that 'no, human rights in Iran were not part of this negotiating process.'.  I have to ask:  Why not?????   As the title of this piece says "Neda was unavailable for comment". Neda, for those who forget, was one of those Iranian citizens who was gunned down and murdered in the bloody aftermath of the 2009 elections in Iran. Need reminding?  Go here, (with graphic video) here, or here to read what the current US administration said about human rights abuses in Iran..

An excerpt from that last link:


US imposes sanctions on Iranian officials for 'abuses'

US President Barack Obama has ordered for the first time sanctions against senior Iranian officials for "sustained and severe violations of human rights".

The eight men include the head of the Revolutionary Guards, a former interior minister and the prosecutor general.

The treasury department said they would face a travel ban and asset freeze.

The alleged abuses include the killings and beatings of anti-government protesters after the disputed presidential election in June 2009.


In a statement, the White House said: "As the president noted in his recent address to the United Nations General Assembly, human rights are a matter of moral and pragmatic necessity for the United States."...


Yes, he really said that.  But I guess that was so long ago, so 'what difference does it make' today, or to the rest of the world?  Even further back but still in recent history, was the 1979 siege by Iranian 'students' of the US Embassy in Tehran.   That was American citizens under attack by the terrorist regime of Iran.  Today?  There are other Americans,  (and no doubt many thousands of Iranian citizens) being held and tortured in Iran, whose fate was not part of the current negotiations. The administration may consider this American's treatment irrelevant in light of this new dawn, but others are noting:

On the night of November 23, 2013, the President of the United States left an American pastor, Saeed Abedini, behind.

The "deal" with Iran announced tonight by President Obama, which allegedly halts "part" of Iran's nuclear program, allows Iran to enrich uranium and allows it to maintain a nuclear program in exchange for an easing of sanctions and humanitarian relief.

It is outrageous that the Obama Administration commenced these negotiations and concluded them without the release of Pastor Saeed – a U.S. citizen.  In fact, the Administration has just confirmed that he was not even part of the negotiations, stating that “The P5+1 talks focused exclusively on nuclear issues.”

The Obama Administration did not volunteer this information; it was revealed only after a specific inquiry from Fox News.

For more than a year, Pastor Saeed has undergone torture at the hands of his Iranian captors, most recently being transferred to one of the most deadly prisons in the world.  Yet instead of demanding the release of this innocent U.S. citizen as a precondition to any negotiations with Iran, the Obama Administration is relaxing sanctions and providing humanitarian relief, while getting nothing but more meaningless promises in return....

Read the rest of this here.

There is also a former US Marine still being held in an Iranian prison under who knows what conditions of deprivation.  I seriously doubt if  Amir Mirza Hekmati's fate was 'part of these negotiations.'

Back in March 2012, War On Terror News wrote this: 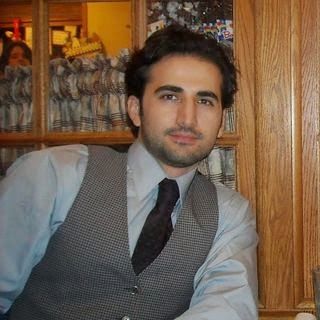 Iranian state media is reporting that the Supreme Court has overturned a death sentence for a U.S. citizen convicted of "spying for the CIA."

Quoting the prosecutor general, ISNA reported on Monday that the case of former U.S. Marine Amir Mirza Hekmati “has been sent back” to a lower court for retrial.

Iran's Islamist Revolutionary Court announced in January that Hekmati was convicted of several crimes — including cooperating with a hostile nation, being a member of the CIA and trying to implicate Iran in terrorism.
Picture courtesy of www.FreeAmir.org

The 28-year-old Hekmati was arrested in December.

Iranian TV showed Hekmati in December appearing to confess his crimes, in a mixture of English and Farsi. Hekmati  talked of receiving language training.

Hekmati said he received the training at U.S. bases in Iraq and Afghanistan before traveling to Iran.  His family said he was in Iran visiting grandparents.  VoA.

As recently as September this year, he was still there, at the mercy of the Iranian 'justice' system:

DETROIT A former U.S. Marine held in Iran for two years said in a letter to the U.S. secretary of state that he has endured "miserable prison conditions" and believes Tehran is holding him hostage for use in a possible prisoner exchange.

Amir Hekmati's letter, handwritten and dated Sept. 1, was addressed to John Kerry and first published Wednesday by Britain's Guardian newspaper.
Hekmati, 30, wrote that he has been "held on false charges based solely on confessions obtained by force, threats, miserable prison conditions and prolonged periods of solitary confinement.
"This is part of a propaganda and hostage-taking effort by Iranian intelligence to secure the release of Iranians abroad being held on security-related charges," he wrote in the letter that the Guardian said was smuggled from the prison.


Hekmati has been detained in Iran on what the U.S. says are false espionage charges since his 2011 arrest. Hekmati's family says he traveled to Iran to visit his grandmothers.

The letter goes on to say that while Hekmati and his family "have suffered greatly," he "will accept nothing but" an unconditional release.

The State Department late last month repeated its call for Tehran to release Hekmati and two other Americans....


In the midst of all the back-slapping and applause, there is at least one country - other than Israel - who was swift in speaking out about this latest turn of events.   Can you guess which one? No 'thumbs up' from Canada.

Foreign Affairs Minister John Baird says he is "deeply skeptical" of the newly brokered nuclear deal with Iran and says Canada's sanctions will remain in "full force" against the country.

"We will evaluate the deal reached not just on the merits of its words but more importantly, on its verifiable implementation," Baird said at a news conference in Ottawa on Sunday.

He said that because of previous Iranian leaders had made hostile comments toward Israel, “we're deeply skeptical of the deal and the work that's brought us to this stage.”...

There are so many things wrong with this 'interim' deal, not least of which IS the global impact.  No matter that MIC et al would have us all believe that a new era of  kumbaya is upon us, wishing AND empty rhetoric doesn't make it so.

I have been saying for a while now that we live in very dangerous times.