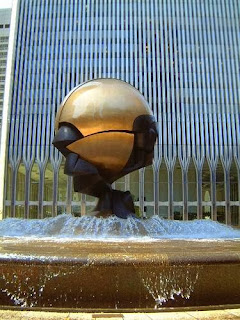 Fritz Koenig's Sphere for Plaza Fountain, the sculpture that was the centerpiece of the World Trade Center Plaza.


The Sphere was battered and damaged on 9/11 and over the years, there was debate about just where it should be placed. Now comes this latest news from The New York Times: 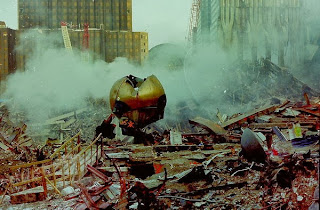 Fritz Koenig’s “Sphere” amid the rubble at the World Trade Center in the days after the Sept. 11, 2001, attack. The sculpture was relocated to Battery Park in Lower Manhattan in 2002.

The fate and future of Fritz Koenig’s “Sphere” — the surviving sculptural centerpiece of the original World Trade Center — have been a mystery for more than a year and a half.

Rededicated in Battery Park in Lower Manhattan on March 11, 2002, as New York City’s interim memorial, the “Sphere” has been sitting for months behind a construction fence while the park is renovated. No one in a position to know what might happen to the 25-foot-tall bronze globe, which still bears the scars of Sept. 11, 2001, would disclose anything publicly about where it might end up. Or when.

So when a work crew arrived on Wednesday and began dismantling the sculpture, placing one hemisphere on the back of a flatbed truck, and a crew member said that he could not divulge where the “Sphere” was headed, it seemed as if the cloak of secrecy was about to swallow the sculpture whole....