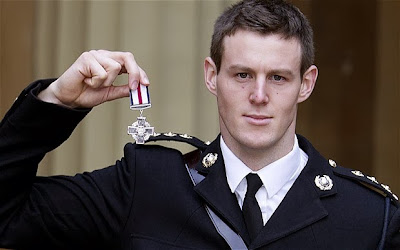 Captain Owen Davis, Royal Marines, who was awarded the Conspicuous Gallantry Cross for great courage in the face of the enemy whilst serving in Afghanistan Photo: HEATHCLIFF O'MALLEY FOR THE TELEGRAPH

A young Royal Marine officer likened to Lawrence of Arabia for immersing himself in an Afghan police unit to live and fight alongside them has received one of the highest awards for gallantry.
Capt Owen Davis learnt fluent Pashto, grew a long beard and bonded with his Afghan militiamen comrades in Helmand over poetry and cricket.
He fought alongside them almost daily against local Taliban insurgents and was nearly killed when a grenade landed at his feet during the storming of one compound.

The 25-year-old from Swansea received a Conspicuous Gallantry Cross, second only to a Victoria Cross, for his courage and “exemplary” leadership....

In case you missed it, from the MoD here's the Operational Honours List from October.