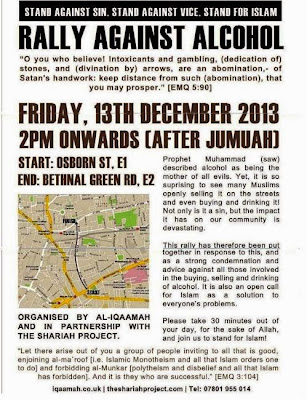 A sign of things to come in cowed, clueless, compromised Britain, unable or unwilling to stand up for its own societal principles. These Islamic supremacists are not content to obey Islamic law themselves; they have to bring everyone else under its sway as well. And with Sharia institutionalizing discrimination against women and non-Muslims, that is hardly a benign imperative.


A planned march by Muslims against the sale and consumption of alcohol in the hip heart of east London has drawn "overwhelming support" from around the country, organisers have claimed. Protesters intend to protest on Friday in Brick Lane, Tower Hamlets, by targeting shops selling alcohol in a street famous for its trendy bars and curry restaurants.


The demonstrators said that selling booze was un-Islamic and caused social problems....

Because "Islam is the solution to everybody's problems" ????? What could possibly go wrong?   Friday the 13th?  In Brick Lane?  Booze?

Is this the 'new' face of tolerant Britain?  Go read much more here.


AAR here, with Anjem Choudary front and centre.  What a surprise -NOT!
Posted by The Brat at 6:37 AM