Who'd a thunk it?  WHO is watching the Watchers? 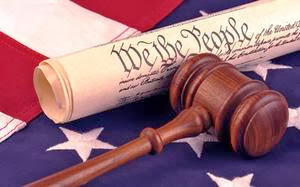 A federal judge, describing the NSA metadata collection program as “almost Orwellian,” yesterday ruled that the program which systematically collects and keeps records of all Americans’ phone calls most likely violates the Constitution.

“I cannot imagine a more ‘indiscriminate’ and ‘arbitrary’ invasion than this systematic and high-tech collection and retention of personal data on virtually every single citizen for purposes of querying and analyzing it without prior judicial approval,” Judge Richard J. Leon wrote. “Surely, such a program infringes on ‘that degree of privacy’ that the founders enshrined in the Fourth Amendment.”

The judge ordered the agency to stop collecting data on two plaintiffs’ personal calls and destroy the records of their calling history.

In his 68-page ruling, Judge Leon described the program’s technology “almost Orwellian,” and suggested that James Madison, the author of the Constitution, would be “aghast” to learn that the government was encroaching on liberty in such a way...

WHO is watching the watchers?


Meanwhile in other 'security' related news:

From New York Times comes this question - which must surely be rhetorical:

LAST year, two literal-minded Supreme Court justices were considering whether police officers needed a warrant before placing a GPS tracking device on a suspect’s S.U.V. when they ended up having a rather fanciful argument: What would the founding fathers make of a GPS device, anyway?

To Justice Samuel A. Alito Jr., the question was preposterous: what would be the pre-digital version of a GPS device, he asked? An officer tucked in the undercarriage of a coach? “This would have required either a gigantic coach, a very tiny constable, or both — not to mention a constable with incredible fortitude and patience,” he noted in a footnote regarding the case, United States v. Jones.
But his partner in the argument, Justice Antonin Scalia, didn’t accept the obvious mockery: the image — “a constable’s concealing himself in the target’s coach in order to track its movements” — is “not far afield,” he wrote.

It was a bizarre enough exchange in itself. But beyond the technical details of the case, the justices were essentially grappling over a proper metaphor for digital surveillance. Some people — especially those inclined to be forgiving of new cybertools that can be used for spying — cast the issue in historical terms, seeing the connection between a smartphone and a landline, for instance, or between digital records and the paper records once kept in City Hall.

Those who are more skeptical, however, tend to favor more “1984”-ish imagery. They are not content to say, oh, that’s just an algorithm reading my email, a technique Google’s Gmail service uses to place ads. Reading for them is necessarily human, even when it is done by a computer. And because of those diligent computers, more third-party reading of correspondence is being done now than ever in human history. Similarly, a smartphone — an unprecedented combination of personal journal, photo album, record library and correspondence desk — becomes something distinctly different from an old landline....

Is it paranoia if they really ARE watching you?  Pay attention.
Posted by The Brat at 6:55 AM