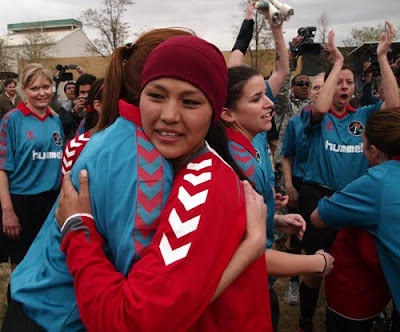 KABUL, Afghanistan Oct. 29, 2010 - Zahara Mahmoodi, 20, who was born in Iran after her parents fled Afghanistan during Soviet occupation, hugs an International Security Assistance Force women's football team member after a friendly match Friday. Mahmoodi, who returned to her ancestral homeland six years ago, says she loves her country and accepts it with all its flaws. By playing football, she hopes to inspire other women and bring peace to Afghanistan.


With Football Win, Women Try to Promote a Different Vision of Afghanistan

KABUL, Afghanistan (Oct. 30, 2010) -- Khalida Popal is a Taliban nightmare in cleats and nylon. She’s outspoken about women’s rights. She has a job that sometimes leads to her working Fridays. And, perhaps worst of all, she plays football.

In a country better known for makeshift bombs and warlords, Popal and the rest of Afghanistan’s national women’s football team (that’s soccer to Americans) face almost daily harassment for merely kicking a ball around a field. Even with the Taliban out of power, many in this conservative Muslim nation still consider any team sport off-limits to women.

Popal, the team’s captain and head of her country’s women’s football committee, is out to change that.

On Friday, she and more than a dozen women and girls ranging in age from 14 to 23 took the field against women from NATO’s International Security Assistance Force Headquarters to, as Popal put it, show the international community “that we are friendly.”

“The score is not important to me,” she said. In organizing the game, she hoped to show that not everyone in her homeland is “like Taliban – stupid people that they are fighting.” ...