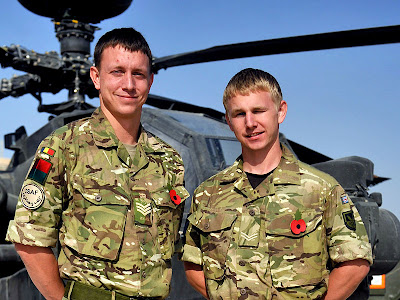 Two brothers are serving together in Afghanistan for the first time, servicing the Apache gunships of 654 Squadron Army Air Corps.

Ray joined the Corps of the Royal Electrical and Mechanical Engineers (REME) in 1998 as an apprentice aircraft technician, the mechanics responsible for the maintenance and repair of the Army's helicopters. Eight years later his younger brother Darren followed him into the trade.

Although they have followed a common career progression, they have never crossed paths professionally until now. Ray is an Aircraft Artificer in 654 Squadron's Close Support Section in Afghanistan while Darren is part of 7 Air Assault Battalion REME, who have sent extra technicians to bolster the support section during a tough and demanding deployment to Camp Bastion in Helmand province.

Darren was only seven years old when Ray joined the Army at the age of 16:

"This is the most time we've spent together by a country mile," says Ray. "I've been keeping an eye out for him; we're getting to know each other a lot better."...

Much more over at MoD here.