Tanker Bros gone to the dogs!

Three dog stories today - and not one of them a shaggy dog!!! All very special dogs... 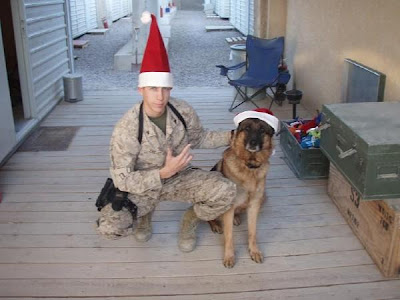 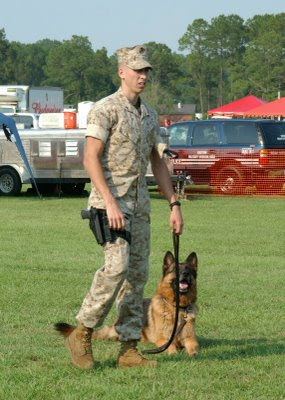 A letter written by Lex:

I'm a U.S. Marine and the primary element of a two-member team trained to hunt and locate explosives. My partner and I trained as a team for many months honing our expertise to save American lives in the War on Terrorism in Iraq.

The date is March 21, 2007 and I was on the job in Fallujah, Iraq when an enemy fired Rocket Propelled Grenade (RPG) exploded in our midst. I was blasted to the ground. I'm Stunned. My head is ringing and my body feels numb. My eyes can't quite focus on anything.

My partner is lying next to me severely wounded and bleeding. I move to him and touch him but he's not responding. I feel sharp pains in my side and back. I'm bleeding but deal with it and concentrate on comforting my partner and protecting him from further harm.

Everything happened so fast that it caused disorientation and confusion. My senses pick up the lingering smell of burnt powder and smoke from the explosion. I hear lots of American voices and heavy boot-steps hurrying all around us. They reach our location and immediately attend to my partner. And then they carry him
away. I'm separated from my partner for the first time. I'm not clear of thought and then I too am carried way but to a different hospital...(much more about our Lex here.)

Nine months to the day that Cpl. Dusty Lee gave his all in service to his country, his beloved dog Lex was finally home with Dusty's family. I originally posted about the campaign to have the military retire Lex, and have him live out his well-earned retirement with the Lee family. You can read that here. 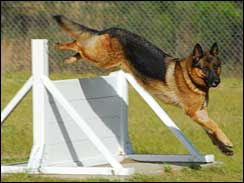 Lex “adjusts very well,” said Reynolds, who has known Lex only since the dog returned from a 12-week evaluation at Camp LeJeune after his injuries in Iraq.

“Lex has a great demeanor. He is great to work with. I’ve enjoyed working with him since being here,” said Reynolds, a former handler with the Albany Dougherty Drug Unit who adopted his own drug unit dog when the dog retired....(more here)

Remember Dusty Lee and his beloved MWD Lex? I wrote about them both here and here.

Now, another milestone in Lex's life:

There are more pictures here. If anyone ever doubted that our K9's ARE heroes, they only have to look at Lex here. He is one of my heroes, and Bratdog's too.

Since that time, Lex has continued to serve America, as he and Dusty's mum work tirelessly with our veterans.

(NECN/CNN) - A scientific breakthrough in medicine is helping one U.S. marine regain his ability to walk. But this wounded warrior is getting help not from a veterans hospital, but a veterinarian's office.

Lex is a survivor of the Iraq war. He and his partner Corporal Dustin Lee were part of an elite team trained to sniff out bombs. In March 2007, Lex and Corporal Lee were hit by a rocket-propelled grenade that took Lee's life.

For his bravery in staying by Lee's side during the attack, Lex was awarded a Purple Heart, but he was left unable to walk on his own.

Stem cells are injected into Lex's hips, knees and bloodstream. After a round of therapy, Lex is already starting to walk again.

How can YOU help our Lex? From K9 Heroes group on FaceBook November 19:

Lex is doing great! Had 3 stem cell treatments today! He is such an Angel!ANYONE WANTING TO HELP K9 CAN SEND DONATIONS TO THE FOLLOWING ADDRESS: GEORGETOWN VETERINARY HOSPITAL--2916 M STREET--WASHINGTON DC 20007 . CHECKS OR MONEY ORDERS SHOULD BE PAYABLE TO DR. LEE MORGAN WITH NOTIFICATION "LEX FUND" THIS WILL BE SET UP TO BENEFIT LEX

There is also a site set up by Cpl Dusty Lee's uncle, which you can find here.

Can YOU help, please? Every donation, big or small, will ensure that Lex lives out his life as Cpl Dusty Lee would want for his beloved K9 partner.

And yes, I DO believe that Dusty is looking on, and smiling.

[*This post Bratdog approved*]
Posted by The Brat at 1:11 AM