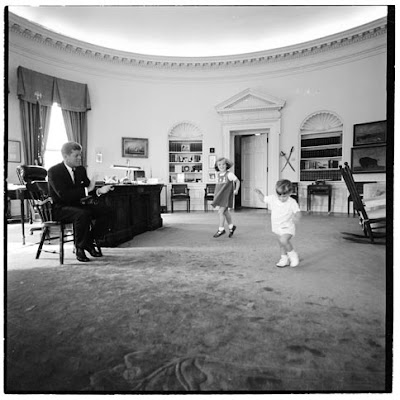 President Kennedy and First lady in the back seat of the car, moments before he was shot and killed in Dallas, TX, on November 22, 1963. Photo by www.spartacus.schoolnet.co.uk

The US and the world mark Monday, November 22, the 47th anniversary of the assassination of US President, John F. Kennedy, deemed one of the defining moments in history.

The assassination of John F. Kennedy, the thirty-fifth President of the United States, took place on Friday, November 22, 1963, in Dallas, Texas, at 12:30 p.m. Central Standard Time in Dealey Plaza. Kennedy was fatally shot while riding with his wife Jacqueline in a Presidential motorcade... (Much more here)

I am sure this will be all over the internet today, and I won't be rehashing it here. You can start at the BBC here. Lots of archival videos and stories.

We dare not forget today that we are the heirs of that first revolution. Let the word go forth from this time and place, to friend and foe alike, that the torch has been passed to a new generation of Americans - born in this century, tempered by war, disciplined by a hard and bitter peace, proud of our ancient heritage - and unwilling to witness or permit the slow undoing of those human rights to which this Nation has always been committed, and to which we are committed today at home and around the world.

Let every nation know, whether it wishes us well or ill, that we shall pay any price, bear any burden, meet any hardship, support any friend, oppose any foe, in order to assure the survival and the success of liberty.

This much we pledge - and more.

In the long history of the world, only a few generations have been granted the role of defending freedom in its hour of maximum danger. I do not shank from this responsibility - I welcome it. I do not believe that any of us would exchange places with any other people or any other generation. The energy, the faith, the devotion which we bring to this endeavour will light our country and all who serve it -- and the glow from that fire can truly light the world.

Email ThisBlogThis!Share to TwitterShare to FacebookShare to Pinterest
Labels: JFK 47 years on