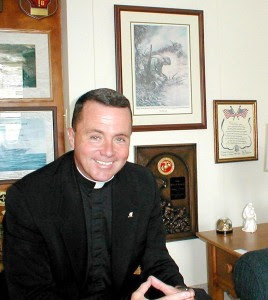 
CDR Rocheford is (was) a military Chaplain. As such, in my mind, he most assuredly is a very special breed.

Courtesy of BlackFive link here, I came across a MUST READ tribute column:

Saint Michael the Archangel, Defend us in battle; Be our protection against the wickedness and snares of the devil; May God rebuke him, we humbly pray; And do thou, O Prince of the heavenly host, By the power of God, thrust into hell Satan and all evil spirits Who wander though the world for the ruin of souls, Amen.

There is a war casualty that will not make its way into any DoD announcement of US service personnel. The death occurred fourteen months ago, and I will admit that I didn’t hear about it for several months. And when I did, I was deeply saddened but cannot truthfully say I was surprised.

I first met CDR Dennis Rocheford in 1990, not long after he had joined the Navy. He arrived to be the new Recruit Depot Chaplain at Parris Island, where I was stationed as a Series Commander training recruits. Tall and lanky, he looked born to wear the Marine Alphas I first saw him in. And indeed he was. At a time and place where almost nobody wore more than one or two ribbons, Father Rocheford had a chest full. And those he wore had gravitas. Two Purple Hearts, from a VC bullet through his side, and mortar fragments to his chin and face. A Bronze Star. Combat Action Ribbon. The story of this handsome, friendly, fiercely faithful new Chaplain spread quickly. He had been Ray “E-tool” Smith’s radio operator as a Lance Corporal on Hill 881 at Khe Sanh with Alpha Company, 1st Marines, and had survived the fierce fighting in Hue City. When he was asked how he came to join the Navy as a Chaplain, he told us that, after surviving Vietnam, he promised God he would not waste his life.

Father was from Worcester, MA, not far from where I grew up, the city where I attended college. I immediately struck up a friendship with this gentle man of immense strength. I admired the way he ministered to recruits who sought his counsel. He would not hesitate to tell those whom he knew to be “skylarking” to quit bellyaching and get back to their platoons, while providing spiritual guidance to those whom truly were in need. Father Rocheford would show up at any and all PT events, and at 40 (which seemed OLD then, but somehow not so much now that I am 46) displayed his remarkable physical condition by always leading the events from the front.

When we had a chance to chat, he would talk with me about home, and mutual places and acquaintances, of which there were surprisingly many. We also discussed faith, and why I was no longer attending Mass (I am Catholic). To my surprise and relief, instead of reading from the “script”, he listened. (My hometown was the site of very serious abuses by a number of Priests in the 1970s. Some of my friends and people I knew were victims who’d had their lives destroyed.) I was thrilled to have Father Rocheford preside over my wedding in 1992. He made a very good impression on my parents, who talked of him in the years that followed quite often, and always in glowing terms.

Following Parris Island, I saw Father Rocheford on occasion at Camp Lejeune, where he was the Chaplain of 3rd Bn 8th Marines, and then 26th MEU. Even after months or years, he was able to make me feel as if we were picking up a conversation from hours or minutes before, and always had time for a smile, a handshake, and inquiry about myself, my life, my parents, and my Marines.

When I left active duty and joined the 25th Marines headquartered in Worcester, MA., whom do I see on my first Sunday drill but Father Dennis Rocheford. He had transitioned to the Reserves as well, and was our Regimental Chaplain. I found that he was very popular with the unit of tough, largely Catholic Officers and Marines of the Regiment. There were, it seemed, legion Marines who had served with Fr. Rocheford at 3/8, on 26th MEU, and even at Parris Island. His services in the end-hallway classroom were always packed, but I still found standing room in the back. After three years I transferred to 3rd Bn 14th Marines in Philadelphia, but on occasion would attend planning conferences at 25th Marines, where Father Rocheford always greeted me with a smile and a hearty handshake....

If you read NOTHING else about this war our heroes are fighting, you MUST read this column. Find it here.

I believe that there is a special place in heaven for men such as CDR Rocheford.

I will always remember his most beautiful face, and his name. Will YOU?