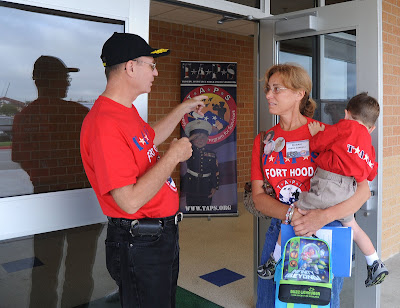 
FORT HOOD, Texas - "I was sitting at home at 11:30 [p.m.] at night when I noticed a car's lights coming down my long driveway," David McNabb said recently at the TAPS Fort Hood Military Survivor Seminar & Good Grief Camp, where more than 300 survivors shared stories at this annual event.

McNabb was remembering the night he was notified about his son's death at his home in Terrell, Texas.

A combat veteran with five overseas deployments, 24-year-old Shawn was on his first deployment to Afghanistan, for only one month, before he was killed. During that time, he was credited with saving the lives of two men.

"I was home alone because Ann, my wife, was staying at a friend's apartment in Dallas near where she worked the next morning [beginning] at 6:30 [a.m.]," McNabb said.

The van stopped outside and three Soldiers got out: a chaplain from Fort Campbell, Ky.; a captain from Hunter Army Airfield in Savannah, Ga., where Shawn had been stationed; and an intelligence officer from Shawn's unit.

"They came up to the door and began by saying, 'Sir, the Department of the Army...' but I interrupted them. 'Is he hurt really bad or is he dead?'"

"I told them I couldn't call Ann to tell her, so we had to go to Dallas, about an hour away. I got into their van and we made the rainy trip to the apartment complex, getting there about 1 a.m."

Ann, a registered nurse with 33 years experience, worked in a Dallas hospital and stayed at her friend's when she had to be at work the next morning.

"I had been there only once before. Thankfully, we spotted a security guard who went back to his office, looked up my wife's friend and lead us to her apartment," McNabb said.

"Then we had to tell our daughter, Heather, in Waxahachie," McNabb said. The drive took an hour and by the time Shawn's parents traveled the 60 miles back to their home in Terrell it was 4 a.m.

David is proud to recall how his family were all involved in the medical field. Both his wife and daughter are registered nurses, he was a paramedic with an ambulance crew and Shawn wanted to be a physician's assistant. In fact, he was scheduled to begin classes this year. In January, David begins a four-year term as the Justice of Peace and will become heavily involved with helping the kids in the two school systems in his district.

"Later that day, Chief Mark Kelsey, acting as Casualty Assistance Officer, came up to the house with a first sergeant from our son's special operations unit. The first thing Mark told us was to eat, drink and try to sleep, and to remember where we put important things."

"He brought his experience and his extremely professional manner to help us get through all the things we needed to do. In short, Chief Kelsey made things flow easily for my family by taking care of business gently and kindly," McNabb said.

"From 2006 to July, 2010, I was mobilized as an Army Reservist to enter onto Active Duty as an Army Casualty Notification/Casualty Assistance Officer. I was assigned to the Fort Hood Casualty Assistance Center, under the leadership of Chief of Casualty Lee R. Price, with duty in Pantego, Texas, in the Dallas/Fort Worth area," Kelsey said.

The Army's goal is to have a Casualty Notification made within four hours of the Casualty Assistance Center receiving information of the Soldier's death.

"With Fort Hood having 175 counties in its area of responsibility, it can take eight hours for us to notify someone in Amarillo, for instance. In this case, we'd try and contact the Reserve or National Guard to notify and right behind this person would be the Casualty Assistance Officer," Price said.

"Having me forward deployed helped them better achieve that mission goal of four hours," Kelsey said.

At the beginning of his tour of active duty, Kelsey attended a 40-hour comprehensive training program conducted by the Fort Hood Casualty Assistance Center.

"In 2007 I attended this training again as a refresher. I also took online annual training conducted by the Casualty and Memorial Affairs Operations Center in Alexandria, Va," Kelsey said.

A Casualty Notification/Casualty Assistance Officer is similar to a first responder who renders aid.

"I saw myself not only as the person [who] delivered such devastating news, but also as the first person who could help them recover from their shock and grief. Recently, one of my surviving family members sent me a card thanking me for, 'providing her a comfortable place to fall.' I will forever be humbled by the kindness and love these surviving family members have shown me," Kelsey said.

"I once asked Chaplain Elliott, who accompanied me many times, why it is that we can do the work that we do and he responded, 'God gives us the tools we need to do the job that he calls us to do.' His response bolstered what I was already feeling, that I was "called" to do this work."

Last year, Mark Kelsey took leave from Active Duty so he could volunteer at the TAPS Fort Hood Good Grief Camp. He did it again this year after retiring from the Army.

"It was a privilege for me to have assisted so many of our surviving family members and I thank them for the honor of being there for them when they needed help the most," Kelsey said.
(here)

For a Q & A page on what the Casualty Assistance Office's official mandate is, go here.

CWO4 Mark Kelsey and all the Casualty Assistance Officers must be really special people to do the job they do. They are - without doubt - heroes, every single day.
Posted by The Brat at 2:22 AM