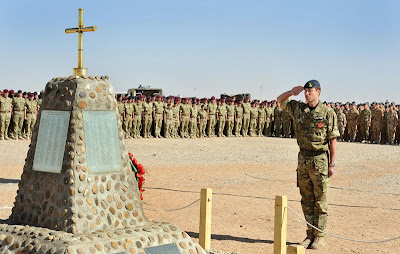 Prince William stands to attention and salutes the memorial to the British Soliders killed in Afghanistan, during a remembrance day ceremony at Camp Bastion
[Picture: John Stillwell/PA Wire]

Prince William visited British troops in Afghanistan today and joined them for a Remembrance Sunday Service during which he laid a wreath in memory of the fallen.

Prince William laid a wreath to his own friends as well as others who have lost their lives in Afghanistan.

A two minutes' silence was held, after which Prince William laid a wreath bearing the note: "For Jo, Lex and all those who have made the ultimate sacrifice for our country."

Prince William wrote an article which has been published in the Sunday Telegraph today, during which he described how he is humbled by the respect shown for fallen heroes. ..

After meeting troops, William visited a hospital on the base before the service, held just before 1100hrs.

On the hour, guns at Camp Bastion signalled the beginning and end of two minutes' silence.

More from the MoD here. And the column Prince William wrote:

Prince William: I am humbled by respect for Armed Forces

Writing for The Sunday Telegraph, Prince William praises the nation's "striking and moving" tributes to the Armed Forces


Somebody once said that heroes have the whole earth for their tomb. This country, perhaps more than any other, knows the wisdom of these words.

On war memorials up and down the land, on church walls and in school assembly rooms, we are reminded every day that men and women from the United Kingdom and the Commonwealth have laid down their lives for freedom and the values on which our society is based.

The sacrifice they made – and continue to make – must never, ever be forgotten.

We read sometimes about our nation not being a united society, and that its old values have been forgotten. When I see the extraordinary response on this day, every instinct tells me that this is not true.

Even after death, those who have paid the supreme sacrifice still serve us all by uniting us in a common realisation that, through their example, an overriding sense of duty and a willingness to defend freedom at any cost are the values which really count, the finer traits of humanity to which we should all aspire.

The country is as fervent in its support for our Armed Forces, and the sacrifices that they make, today as it has ever been.

The national awareness of what young men and women are doing for us in the most extreme and hostile environments imaginable is striking and moving.

I find this remarkable and, frankly, humbling – particularly when one considers that, despite the level of sacrifice being made by individuals today, far fewer of us are likely to know someone in uniform than, say, was the case in our grandparents' day.

Nowadays, for the majority of families up and down Britain, the full impact of what is means to be at war is seen at several degrees removed. To me, I think, this makes the response of the British people even more remarkable...