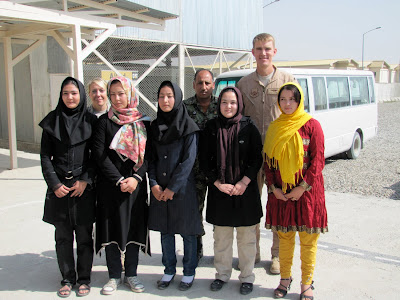 "They were all extremely professional, motivated, and their English is fantastic," said Lt. Col. John Howard, the lead Thunder Lab advisor. "My sense is that these women will serve as an inspiration for other potential female officers, as well as keep the male lieutenants at the top of their game." (more here)

After Debra read this story, she was inspired to write the following poem, which I print here with her permission:

Who are these young women with dark eyes and dark hair,
With beauty that runs so deep, and courage rare?

...From what cloth were the cut, and where was it woven?
Who was the artist from whose mind the colors were chosen?

Of what fiber is the cloth and thread made,
That forms their true hearts which when they were bade,

By whispers to their souls of service to their country and us all,
Without hesitation bid them answer that call?

The fiber from which those threads took shape,
Was grown by the people of their nation who do not hate.

The seeds were planted in the soil by their fathers.
Then the fibers were collected at harvest by their brothers.

The thread of hope was spun by the hands of their skilled mothers.
None gave heed to the threats of others.

Then they were woven by their sisters, whose lives will be forever changed,
By the steps that they take and the destiny they arrange.

Finally from the Artist’s hand, priceless treasure, a gift from Afghanistan,
Came to the people of the world who desire only with honor to stand.

Their mark and place in history their names will take.
When their life’s work is made for the peace that lies at stake.

Who are these young women with dark eyes and dark hair,
With beauty that runs so deep, and courage rare?
Debra LeCompte

Who are they, indeed? From the words of this beautiful tribute to these courageous women, I KNOW Debra agrees with me that they are the hope, the future of Afghanistan. As I watch these amazing young women step up to take their place in Afghanistan's history, it is a reminder of why we have been there all these years, ensuring that incredible women such as these can indeed reach for their hearts' desires, and capture their dreams.
Posted by The Brat at 7:26 PM