Fisher House at Dover: A special house for special families

Fisher House is twenty years old this year, and as anyone who knows anything about the US military knows, they do amazing work for our wounded and their families. Did you know?:

There is at least one Fisher House at every major military medical center to assist families in need and to ensure that they are provided with the comforts of home in a supportive environment. Annually, the Fisher House program serves more than 11,000 families, and have made available nearly three million days of lodging to family members since the program originated in 1990. By law, there is no charge for any family to stay at a Fisher House operated by the Department of Veterans Affairs; and Fisher House Foundation uses donations to reimburse the individual Fisher Houses operated by the Army, Navy, and Air Force. No family pays to stay at any Fisher House! (go check out their home page here.)

This last week, a very special Fisher House was opened at Dover:

Fisher House dedicated for Families of the Fallen 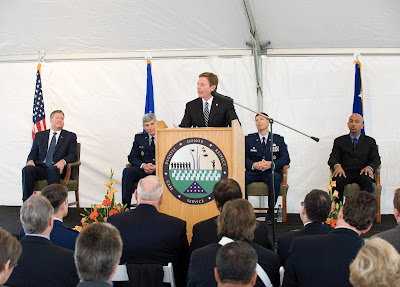 Ken Fisher, Chairman of Fisher House Foundation, addresses the audience at the dedication ceremony for the Fisher House for Families of the Fallen here Nov. 10, 2010. The house was gifted to the Air Force to support families coming to Dover to witness the dignified transfer of a loved one. (U.S. Air Force photo/Jason Minto)

11/10/2010 - DOVER AIR FORCE BASE, Del. -- A Fisher House for Families of the Fallen opened its doors during a ribbon-cutting ceremony Nov. 10, at Dover Air Force Base, Del., after six months of dedicated construction.

For the first time since the Fisher House Foundation began 20 years ago, a house has been built to serve as a place for families who come to Dover AFB to witness the dignified transfer of a loved one.

Fisher Houses have supported military families and Veterans near medical facilities across the nation for two decades. Although this is the 50th Fisher House to be built, it is special because unlike the others, this house will not be located next to a military hospital or Veterans Administration medical center. Instead, it is adjacent to the Center for Families of the Fallen, where those who come to Dover receive care and support, before and after the dignified transfer. The center also provides a point of contact where families can request follow-up assistance, such as counseling services or other needs, as they cope with the loss of their loved one.

Both buildings were gifted to the Air Force on behalf of the Fisher House Foundations and were made possible by private donations.

"This is a unique kind of Fisher House, created to provide comfort and solace for families dealing with the worst of war," said Ken Fisher, Chairman of Fisher House Foundation. "At the same time, this new facility is wholly consistent with the Fisher House mission of providing our military families the love and support they not only need, but to which they are entitled."...(go here to read more of what Mr Fisher had to say about our most precious families...)

And from the Fisher House site:

A comforting space for families of the fallen in Delaware

From the outside, the stone-fronted, perfectly landscaped building could be any conference hall, office space or small corporate headquarters in America.

But stepping inside the front hall reveals a cozy, warm atmosphere with comfortable chairs, nature paintings and photographs and blue-and-white china in a cabinet providing a homey touch.

The building dedicated Wednesday on the campus of Dover Air Force Base is not an office center, but rather a welcoming station for families of America's men and women who have fallen in service to their country.

For Ruth Stonesifer of Doylestown, Pa., whose Army Ranger son, Kris, was killed in a helicopter accident in Pakistan in 2001, it is both a practical way of helping people who have been through what she has been through, and a symbol of America's commitment to those who serve.

"They will be able to be embraced by a supportive community," she said.

Delaware's house ... is designed to host families of the fallen. It is part of a broader support effort at Dover that includes the Center for the Families of the Fallen and a separate meditation center across the road from the Fisher House lodgings.

It's not a day of celebration, said Ken Fisher, who chairs the foundation his uncle began in 1990, but rather a time for reflection.

"Fisher House, by tradition, has been part of the healing process," he said. "Unfortunately, the need is there."

The house was built in record time -- six and a half months from groundbreaking to opening -- after Fisher House officials learned last year that families coming to Dover had to stay off-base, in hotels and motels...

Go here to read more about this special place for the families of our fallen - and read what Montel Williams had to say, too.

Mr Fisher had this to say as part of his remarks at the opening:

" [...]Being with the Gold Star mothers and being with so many that have sacrificed - it's really hard to put into words without really getting emotional - just being here and being able to support the work that is being done here that nobody knows about is the best part of the day for me, said Mr. Fisher.

To which I can only say: Thank you, Mr. Fisher, and all who worked tirelessly to fill this need. The families of our fallen deserve nothing less.