2 YORKS off to Cyprus 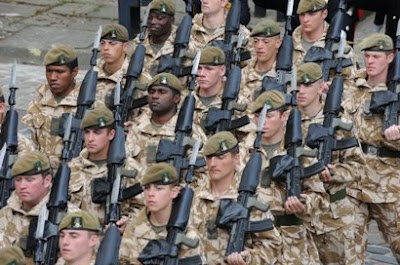 Soldiers from The Yorkshire Regiment (Green Howards) will be saying farewell to two of the towns in its heartland as it prepares for an overseas posting to Cyprus.

The troops from the Regiment’s 2nd Battalion (formerly known as the Green Howards) are preparing for a summer move to Cyprus where they will become the Theatre Reserve Battalion with troops ready to support on-going operations in Afghanistan.

Exercising their Freedoms of Whitby and Guisborough by marching through the streets provides the ideal opportunity to say farewell the towns that are closely tied with the soldiers and their families.

Eighty soldiers from ‘B’ Company commanded by Major Barry Terry will step off from the car park in Church Street at 11.00 am on Tuesday 19 July.

Eighty soldiers from ‘C’ Company commanded by Major Rich Grieve will step off from Belmont House, Spring Wood Road at 11.00 am on Wednesday 20 July.

The Battalion can trace its roots back to 1688 when the regiment was first raised for service under William, Prince of Orange. It traditionally recruits from North Yorkshire and Teesside. A total of 18 Victoria Crosses have been awarded to the Regiment.

Between October 2009 and April 2010, the Battalion served in Afghanistan working closely with the Afghan National Security Forces throughout Helmand province in areas such as Sangin as part of the Operational Mentoring Liaison Team.

Email ThisBlogThis!Share to TwitterShare to FacebookShare to Pinterest
Labels: 2 YORKS to Cyprus