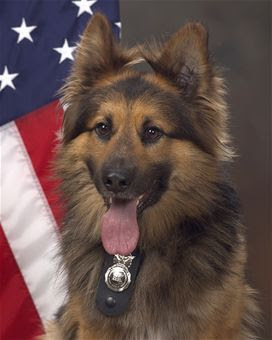 Nero, a 21st Security Forces Squadron military working dog passed away earlier this year and was honored in a memorial service on Peterson Air Force base July 21, 2011. Various 21st Space Wing members gathered together to remember Nero and his service, which spanned nearly a decade. Many Airmen on Peterson AFB remember Nero from around base for his long fur and lovable demeanor. Military working dogs are considered not just animals, but vital partners to their human comrades. The loss of a working dog is similar to the loss of any other member of the unit. (U.S. Air Force photo)

7/25/2011 - PETERSON AIR FORCE BASE, Colo. -- Nero was born in October 1999. Through an academy at Lackland Air Force Base, Texas, Nero completed both a patrol school and explosive detector school, and arrived at Peterson Air Force Base ready for duty less than three years later.

Nero, a military working dog, was honored at a memorial service July 21 at the Peterson AFB auditorium.

On the stage was a display honoring the bond between Nero and his handlers.

"The leather leash and chain represent the everlasting bond between dog and handler," said Staff Sgt. Tony Carter, 21st Security Forces Squadron military working dog handler and ceremony narrator. "The empty kennel where he once slept represents the life he gave to protect us, our brothers and sisters, and our freedom. The inverted bucket reminds us that Nero is no longer here to fulfill the need for food and water in a life that asked for no more in return than our companionship and our affection."

Nero was trained to detect commercial dynamite, tovex, TNT, syntax, smokeless powder, detonation cord, C-4, sodium and potassium chlorate. When he indicated the presence of these odors, he was rewarded with a toy called a Kong ball.

"Without a doubt, Nero's contribution to base defense while deployed deterred terrorist efforts, fortified our installations, and ensured our success of our flying mission," Millay said...