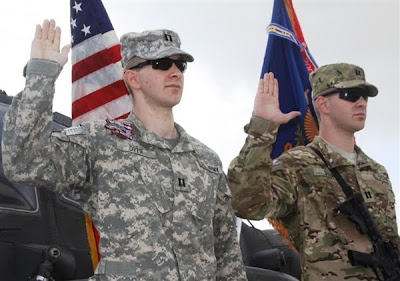 Jonathan and Nathan Dyer, originally from Bristol, Maine, graduated in the top 5 percent of their class at the U.S. Military Academy in West Point, N.Y.

The two have always looked up to those who serve their country, said Nathan, an AH-64D Apache pilot and platoon leader with the 10th Mountain Division’s 10th Combat Aviation Brigade, serving with Task Force Tigershark. Their father and brother served in the Air Force and Coast Guard, respectively.

“It is one thing to talk about service and the desire to give back to the country that has given us so much,” Nathan said, “but it is entirely another thing to actually put your life and energy towards the service of our country. My brother and I shared a desire to put our commitment and desire to serve to the test and join the military as our father and older brother had done.”

Though the brothers serve in different career fields, they’re learning from each other’s experiences, Nathan said.

“We quickly came to see how different [our duty positions] are,” he explained, “but also how they complemented each other and how we could work better together.”

The promotion ceremony marked the first time in two and a half years that the brothers were able to see each other.

“My trip to Salerno had only one purpose: to pin on captain’s bars with my brother,” said Jonathan, who is based out of Mazar-e-Sharif in northern Afghanistan. “It’s a once-in-a-lifetime opportunity to both pin on captain rank while we are both deployed in Afghanistan.”

Thank you both for your service.