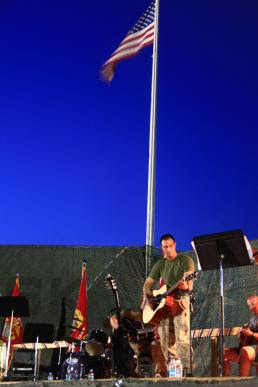 Sgt. Sean P. Castaneda and his band, “550,” perform Lynyrd Skynyrd’s, “Simple Man” during Fourth of July festivities at Camp Leatherneck, Helmand province. Castaneda, originally from Cheyenne, Wyo., is an imagery analyst in the Marine Corps Reserve, who is pursuing a musical career in Hollywood, Calif

Hollywood Will Have to Wait for Sgt Sean Castaneda

RC-SW CAMP LEATHERNECK, Afghanistan – Whether Sgt. Sean Castaneda is recording an album in Hollywood, Calif., or providing imagery intelligence to troops on the ground in the desert of southern Afghanistan, serving his country while pursuing his music dreams are just another day.

Castaneda, 23, originally from Cheyenne, Wyo., enlisted in the Marine Corps Reserve in 2006 as an imagery analyst with 4th Marine Logistics Group. He is currently deployed with 2nd Intelligence Battalion, Regional Command Southwest. As an imagery analyst, Castaneda’s job is to provide eyes in areas troops on the ground may not be able to see, allowing them to know what to expect in areas not visible. This gives coalition forces in the fight the advantage of being able to see the unknown, lowering their chances of taking casualties.

“Think of it as Google Earth,” Castaneda said. “We provide eyes for overhead. Whether it be for a helicopter landing, route plan or a raid.”

After tossing around the idea of being a pilot, then changing his mind to wanting to be a paratrooper, he finally decided to join the Marine Corps.

Both his grandfathers served in the Navy, one during World War II and the other during the Korean War. He joked they would be proud to know he is serving his country, but they would have teased him for not joining the Navy.

One of his grandfathers, Jerry, flew B-24 Liberators in the Korean War and served as a major inspiration for Castaneda before he passed away.

“I know a lot of my fascination with the military came from him,” he explained. “I wanted to be a pilot for a while because I know he worked on a [B-24 Liberator]. He was a musician too.”

Whether inherited or not, music would become a passion of Castaneda’s as well.

In 2009, Castaneda deployed to Africa aboard the USS Nashville. A morale event during this tour helped inspire him to pursue his dreams of making music into a career...