Oh, I do know we are not all officially Americans, but in these days particularly, it is good to be reminded of the best of what it means to be American. I was given permission to share the following with you all...

Thought I would share this story that happened last night while driving from SC to MO.

I was traveling on Interstate 24 and had just entered Kentucky around 8:30 pm when I spotted a white suburban on the side of the road with it's 4 way flashers on. I hesitated for a second, but decided to stop in case they needed help. I spotted 2 young boys on the passenger side of the vehicle and later saw 2 adult females and 2 younger females. I asked them if they were ok and they said they broke down and they were waiting on a KY state trooper (who never showed up), but their father went off with 2 guys in a pickup truck to find a tow truck. I could tell they were uneasy with the father being gone so I told them I was a Soldier and that I was not leaving them until either the trooper got there or their dad got back. I put the 4 kids in my car with AC and talked with the mother and aunt about how miserable Ky was lol and 40 min later the dad showed back up with these Kentuckians and 10 min later a tow truck who got the truck started for them. I followed them to a gas station to ensure they were good to go and they were. As I was getting ready to pump my gas, the dad ran over and begged to fill up my tank and I refused and told him , we are Americans and we should be taking care of each other. He looked at me like I had 3 eyes and said you are serious aren't you? I replied yes and told him that it was my sincere pleasure to assist his family. By 10 pm I was back on the road.

For the next 5 hours, I did a lot of thinking on how much better this country could be if we just went back to the basics of helping thy neighbor and being considerate. I also thought about how much I preached to my Soldiers about living the Soldiers Creed and I immediately thought of the line I serve the people of the United States and live the Army Values. This family from IL hopefully left KY with great thoughts about the US Army and Soldiers because that is what we do, we take care of our fellow Americans!!!! 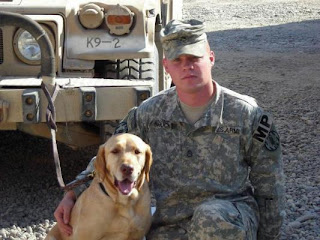 One of my fave Chuck and Gabe pictures from when they were serving America on highways in another part of the world.

I was going to add my own 2 cents' worth (*cough*) of commentary to Chuck's piece above, but no need. I will instead point any new readers here to a previous column I did about why I Believe in America..

It would be so easy to wallow in despair about the state of America these days. However, I have faith that as long as we have men like Chuck, and the individual Americans I introduce in I Believe in America, there is grounds for optimism.

Email ThisBlogThis!Share to TwitterShare to FacebookShare to Pinterest
Labels: Chuck Shuck, God Bless the US Lee Greenwood..., I Believe, We Are Americans