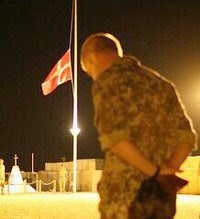 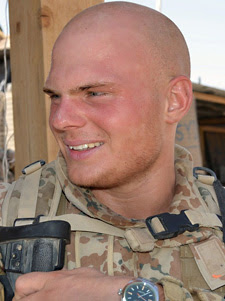 Constable Alexander Biune was killed Sunday morning by an explosion in Helmand.

Alexander Biune started in defending the first February 2010 by the first Company, 2nd training battalion of the Regiment in Slagelse.

On 29 May 2010 Alexander continued his education at the third Squadron, 2nd training battalion at Jutland Dragoon Regiment in Holstebro.

Alexander was released by the Danish Battlegroup in Helmand in Charlie Company's 3rd division, second group.

He is survived by his parents, girlfriend and two younger siblings. (source)

Alexander had a brilliant career ahead of them in the Army. What a pleasure he had and what a drive. To be at the top among its peers, as Alexander was, he just also the key attribute, which is necessary in a military unit - he was one of the best, as I call it. He was responsible for much of social life in its group and its division, and he was a natural rallying point for the rest. Always good ideas, always plenty of energy to try something new and always forward.

Just being at the front was Alexander's great force. He trusted himself, and everyone was safe when he took the lead. He led his mates through perilous areas, and he did it with a conviction that he is better than anyone else would lead all safely through. And he did until the tragic day for all of us - 10 July 2011. The day when we lost Alexander, we will never forget.

We will never forget Alexander.

[...] there was an explosion, which unfortunately cost our good friend and comrade Alexander his life. It all happened so quickly that Alexander felt nothing.

Alexander was a very social person. He could talk to everyone. Never order to him in a bad mood. He was always fresh and never grumbled when the tasks were distributed.

Alexander was both a good friend and a good and professional soldier. He had found his life's work here in the military system. He had after the mission contract with Train Regiment in Aalborg. In addition, he had planned when it was possible to enter the Royal Military Academy.

Alexander did everything he could for his comrades. He was the one who would be responsible for a skiing trip, as third division had planned in week 5 next year, and he also planned the holiday for his family and girlfriend.

Alexander was a very caring person who always strove to be a good companion for the group and division. We have many memories of good experiences with Alexander.

Among his characteristics were a very large consumption of Riesen and Gold Toffees, which he then sweated out in the gym. He was a frequent user of the different tools, which could be seen on his muscular body.

Alexander loved food. He often stood for cooking in patrol base Clifton, and had many good ideas for what should be done. As late as Saturday sat a few mates along with Alexander and read recipes from a magazine. Alexander was immediately looking at recipes which with a little imagination could also be implemented in the kitchen in Clifton.

Although third Sharing scheduled already End of Tour on 5 August, Alexander had volunteered to stay until 18 August. The reason was that Alexander would ensure that the new team had the best possible transfer. It tells a lot about how Alexander was as a person.

Alexander is no more. We will miss your company and will never forget you.

Praise be to Alexander's memorial.


One of our Danish coalition partners said this:

Email ThisBlogThis!Share to TwitterShare to FacebookShare to Pinterest
Labels: Some Gave All: Konstabel Alexander Biune