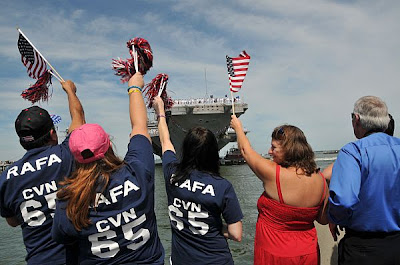 NORFOLK (NNS) -- More than 5,500 Sailors and Marines serving in the Enterprise Carrier Strike Group (CSG) arrived in Norfolk July 15, returning from a six-month deployment supporting operations in the Mediterranean and the Arabian Sea.

Enterprise and CVW-1 flew more than 1,450 sorties in support of Operation Enduring Freedom in Afghanistan and Operation New Dawn in Iraq. Enterprise and the strike group ships also disrupted nine piracy attempts, resulting in the capture of 75 suspected pirates and the detention of 18 more.

"The ships of this strike group have done it all," said Rear Adm. Terry B. Kraft, commander, CSG 12. "Simultaneous combat deployments to the 5th and 6th Fleet areas of responsibility showed what these great Americans can do. They have earned a hero's welcome here in Norfolk."

"Everything about this deployment has been unique," said Mewbourne. "Our Sailors and Marines flexed to perform every mission asked of them to their highest ability, often with great innovation, and always with unqualified success. The crew answered their nation's call with courage and grit, and I share in their tremendous pride of all we accomplished."...