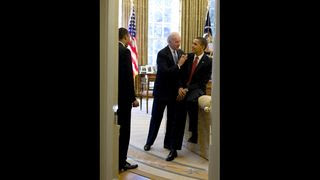 I may be the last to argue in favor of Victory in Afghanistan.

In 1993, Osama thought he understood the lesson: America would back down from a fight, if they just killed a few of Our Troops. He had learned the lesson from Viet Nam, and from Somalia. In both cases, Our Troops had delivered America Great Victories, but the politicians had managed to defeat Our Troops. There was a point in 2006, 2007, and into 2008, where it looked like the politicians would pull a defeat off in Iraq too. In a sense, they did. General Petraeus was able to pull Victory out of the jaws of the politicians in the nick of time.

In the wake of the 2008 elections, I warned colleagues that the media and politicians were going to try it again in Afghanistan. It had been a tough year in Afghanistan, but the war there has been the least deadly in American History.

Nevertheless, the media has done its part to publicize every negative while ignoring the positives. In few other places will you find the stories of the Generosity Our Troops are doing every day. In few other places will you find their daily Victories. The MSM had sabotaged the Mission in Iraq and now they were fully focused on doing the same in Afghanistan. It wasn't for a lack of stories that they didn't report daily. It was for a lack of negative stories and the others they ignored.

They gave a quack in Florida the spotlight when he threatened to burn a Koran, and again when he did so. The MSM knew it would get Afghans and Pakis riled up. In the regular course of events, the MSM would have ignored the ignorance, but they just couldn't pass up the attention. The resulting protests helped convince some Americans that Afghans were worth saving.

When Obama wanted to half-step the request of General McChrystal for more Troops, the MSM helped make his case. When McChrystal complained privately that he was barely being given the time of day (20 minutes at the back of Air Force 1) by the Administration, Rolling Stones published every derogatory remark from every staff member with insinuation that it was McChrystal himself saying it.

When Obama finally announced he had relented to NATO pressure, and would send only 30,000 instead of the minimum of 40,000 requested, he also announced that the withdrawal would begin barely after the Troops arrived. He had campaigned on making Afghanistan, his "just war," his "top priority." Obama owns the current situation in Afghanistan, both in the things he did and the things he didn't do.

It was tempting for Republicans to do to Obama, what Obama and his party had done to Bush; to hype the negatives of the war he had claimed. It was tempting for the Conservatives to argue that it was time to pull out of what the POTUS had staked his own wartime presidency. 2009 was the deadliest year ever in Afghanistan, until 2010. 2011 was worse than 2009. All told, the last 3 years have seen 75% of the post 9/11 violence.

Worse, Obama policies were often to blame. His withdrawal policy, issued in 2009, emboldened the enemy. His political correctness policy tied the hands of Troops to kill the enemy. His revolving door policy was releasing the fighters 30 days after they had been captured. His bombing campaign in Pakistan riled and alienated a reluctant but necessary ally, resulting initially in blocked and burned supplies along Paki supply routes, and then a final block on all supplies through the country. Under the Obama Presidency, Pakistan has gone from fighting the Taliban to embracing them as secret allies. It has gone from an ally to a stonewaller, and that too was predicted, before he was elected....

WOTN has more, and it IS a must read as it adds to our understanding of Afghanistan and our role there; if we are to understand the long range implications to all of us.

Email ThisBlogThis!Share to TwitterShare to FacebookShare to Pinterest
Labels: Afghanistan Still Worth Winning