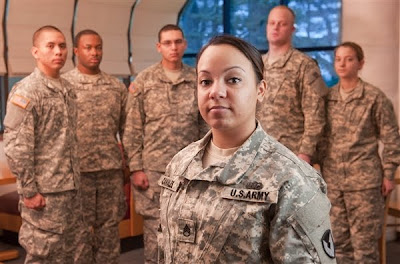 NATICK, Mass., March 7, 2012 – Many soldiers have called the Army their home over the years. Few have meant it more than Army Staff Sgt. Sharalis Canales of the Natick Soldier Systems Center here.

When Canales enlisted in late 2005, she had no home. She was living in a New York City shelter and facing an uncertain future.

"I didn't have a place to live," Canales recalled. "I went to the Covenant House, which is a shelter in Times Square, and I stayed there for six months."

"The Army has not failed me since I've been in," said Canales, who earned staff sergeant rank in five years. "The Army gives me everything that I need. This is my family."

None of this could have seemed possible to Canales at age 14, when her divorced mother gave her up to foster care. She was placed at the St. Cabrini Home in the Bronx....

Staff Sgt Sharalis Canales is truly an Every Day Hero. Go read the rest of this woman's remarkable journey here.

Thank you for your service, Staff Sgt.