Fly the friendly (US) skies? Not so much!

Armed pilot program budget to be slashed in half

The Obama administration’s budget proposes cutting more than half the funding for a program that trains airline pilots to wield guns in the event of a terrorist takeover; the program is voluntary and consists of an intensive eight-day training course and a recurring training every six months; thousands of U.S. airline pilots have been trained to carry weapons as a final line of defense against terrorism. 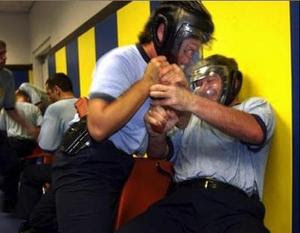 The exact number of federal flight deck officers is classified, but the Philadelphia Inquirer reports that in 2009 a Transportation Security Administration (TSA) spokesperson said there were an estimated 12,000 gun-toting pilots and that the program was set to expand.

The president’s latest budget would reduce the program’s budget from $25 million to $12.5 million. In addition the White House has called for slashing $36.5 million from the Federal Air Marshal Service budget’s $929.6 million budget....

Are YOU paying attention?

Email ThisBlogThis!Share to TwitterShare to FacebookShare to Pinterest
Labels: Air Marshall program to be slashed