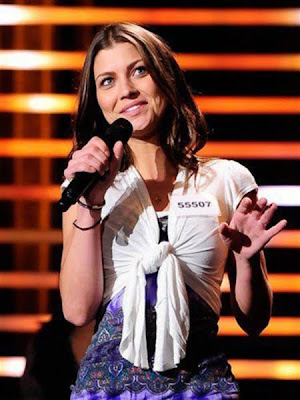 WESTOVER AIR RESERVE BASE, Mass., March 21, 2012 – For one aspiring singer here, her 15 minutes of fame stretched out over weeks as a contestant on the Fox singing competition series “American Idol.”

"It's really hard to describe the experience," the 337th Airlift Squadron loadmaster said in a telephone interview. "You feel like you're on top of the world."

Sieber, from Medford, Mass., received marks of approval from the “American Idol” judges: singer-actress Jennifer Lopez, rock legend Steven Tyler and Grammy Award-winning producer Randy Jackson during her bid to be a finalist in the show’s 11th season.

The first step was her audition in Savannah, Ga.

"I wasn't sure that I was going to make it, so I turned it into a vacation just in case," she said.

But the audition process was no vacation, she said. Potential contestants endure at least three sets of cuts. The number of people who show up to audition can exceed 10,000 in each city, but only a few hundred make it past the first preliminary auditions. Those who are chosen then sing in front of producers. After another cut, contestants audition in front of the judges, which is the only audition phase shown on the show.

Those selected by these judges are then sent to Hollywood for the start of the process that yields the finalists who compete for audience votes when the competition starts in earnest.

Sieber said her experience consisted of many long days.

"It's the first round that takes the longest. I got there at 5 or 6 in the morning," she said. "I don't think I auditioned until 4 in the afternoon, and some people might not have auditioned until 2 the next morning."

The odds of being selected are slim. Anywhere from 10 to 60 of the thousands who audition in each of several cities make it to the Hollywood round.

"We all put “‘American Idol’ on a pedestal, because it has been going on for so long," Sieber said. "You feel like you're on this rollercoaster that is perpetually moving."...