Army Medic rescues more than a dozen during 60 hour mission 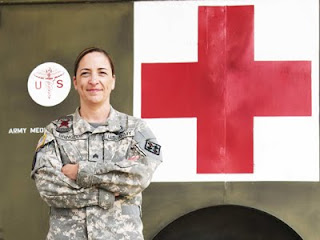 When Army Sgt. Julia Bringloe received the Distinguished Flying Cross during a Manhattan ceremony last week it wasn't for any one particular thing that she had done.

Bringloe, 39, received the honor for dozens of courageous acts performed during a 60-hour mission where she and her medevac crew rescued 14 wounded soldiers.

Erik German from The Daily talked to Bringloe and her helicopter crew about Operation Hammerdown and the nearly three days they spent flying into, hovering above, and dropping in, to extreme danger and live combat. ..

Amazing story about amazing people. Go here for this must read.
Posted by The Brat at 5:18 AM