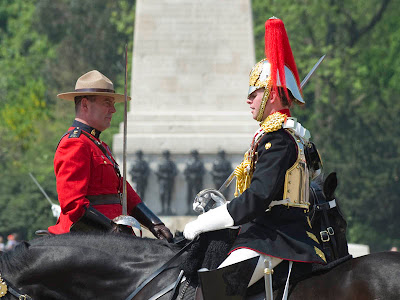 
The Household Cavalry have handed their duties to the Royal Canadian Mounted Police to guard Her Majesty The Queen at Horse Guards Parade.

Re-enacting a gesture made by her father, King George VI, in 1936, HM The Queen has seen fit to celebrate the Commonwealth by inviting the Royal Canadian Mounted Police to take part in British ceremonial this summer.

A strong relationship between the Royal Family and the Mounties was forged in 1904, when The Queen's grandfather, King Edward VII, granted the Canadian Mounted Police the prefix 'Royal' in recognition of the Force's many services to Canada and the Empire.

Yesterday, 23 May, 15 men and horses from the Royal Canadian Mounted Police proudly rode down the Mall for the 11 o'clock Changing of The Queen's Life Guard ceremony with the Household Cavalry.

After special training by members of the Household Cavalry riding staff, the Mounties performed the centuries' old tradition, for real, for one day only....