First-responders get viewing site for 9/11 arraignment 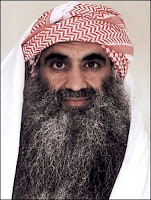 And so it begins.

WASHINGTON, May 3, 2012 – First responders to the 9/11 attack sites will be able to view military commissions proceedings resulting from the attacks that begin May 5 from a site specifically set up for their use.

Some 400 to 600 first responders, officials say, will watch as five alleged 9/11 conspirators -- including the man who allegedly conceived and designed the attacks that killed nearly 3,000 people -- face arraignment at Naval Station Guantanamo Bay, Cuba.

Wendy Kelly, chief of operations for the Office of Military Commissions, told American Forces Press Service that viewing sites for victims’ families and members of the media have been in place for previous proceedings, but first responders until now have not had access to closed-circuit television coverage of courtroom proceedings.

Kelly explained the sites set up for victims’ families are limited to those injured, and the immediate family members --including parents, spouses, children and siblings -- of those killed in the 9/11 and attacks and the Oct. 12, 2000, attack on the USS Cole in a Yemeni harbor that killed 17 U.S. sailors and injured 39 others.

“In recognition of the very unique situation that occurred in New York City with the first responders, we wanted to [make a site available] for police, fire, paramedics and other emergency workers who lost friends and co-workers,” she added.

The new site, at Fort Hamilton, N.Y., is the result of collaboration between the Defense Department and the New York City government, she said.

City officials are in charge of inviting eligible attendees for this weekend’s proceedings, she said.

Four sites are available for family members of 9/11 victims to view proceedings, Kelly said: at military installations near Boston, New York City, in northern New Jersey and in the Washington, D.C., area.

An additional site is available near Norfolk, Va., where survivors of the USS Cole bombing and families of the victims can view proceedings related to that attack. The Cole is home-ported there, she explained, and all the sites are placed where the greatest concentration of family members live.

Kelly said locating the family and first-responder viewing sites on military bases allows DOD to use existing facilities and security measures, which saves cost, and also allows people using the sites to avoid media attention if they prefer to.

Media representatives can gather outside the gates of installations where viewing sites are set up, and those attending the proceedings can engage with them there, she added.

The Office of Military Commissions reaches out to people eligible to attend the proceedings in a number of ways, including through a restricted, password-protected area of the organization’s website, Kelly explained.

Under the Military Commissions Act of 2009, those subject to trial include “an alien unprivileged enemy belligerent who has engaged in hostilities, or who has purposefully and materially supported hostilities against the United States, its coalition partners or was a part of al-Qaida.”

Khalid Sheikh Mohammed is alleged to have proposed the operational concept for the 9/11 attacks to al-Qaida leader Osama bin Laden as early as 1996. He is accused of obtaining approval and funding from bin Laden for the attacks, overseeing the entire operation and training the hijackers in all aspects of the operation in Afghanistan and Pakistan.

The overall charges allege that the five accused are responsible for the planning and execution of the attacks of Sept. 11, 2001, in New York City, Washington, D.C., and Shanksville, Pa., resulting in the killing of 2,976 people.

If convicted, they could be sentenced to death. In accordance with the Military Commissions Act of 2009, each of the accused has been provided learned counsel with specialized knowledge and experience in death penalty cases.

The accused are presumed innocent unless proven guilty beyond a reasonable doubt, officials emphasized.