It is with sadness that the Ministry of Defence must confirm that Corporal Brent John McCarthy, from the Royal Air Force, and Lance Corporal Lee Thomas Davies, from the 1st Battalion Welsh Guards, were killed in Afghanistan on Saturday 12 May 2012. 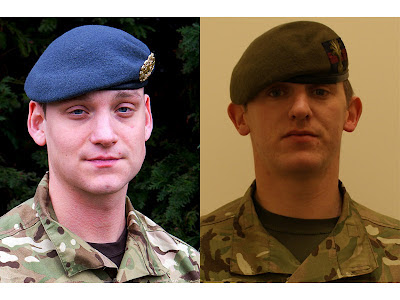 Corporal McCarthy and Lance Corporal Davies were killed by small arms fire while deployed as part of a Police Advisory Team to attend a meeting at the local Afghan Uniform Police headquarters near Patrol Base Attal in the Lashkar Gah district of Helmand province.

Their commanding officer was attending the meeting while Corporal McCarthy and Lance Corporal Davies and the remainder of the team were providing security.

Corporal McCarthy was born into a Service family on 18 February 1987 in Hannover Germany. At a very young age he returned to the Midlands of England where he attended Lilleshall Primary School and Orleton Park School in nearby Wellington. He was staunchly proud of the area and apart from the early years of his life, Priorslee, Telford was where he called home.

Following school he worked in a number of jobs before committing himself to a Service life with the Royal Air Force in August 2008. Following his training at RAF Halton and the Defence College of Policing and Guarding at Southwick Park he began his career within the Royal Air Force Police. He was a man of many talents and diverse interests including football, playing drums in a band and representing the RAF at hockey.

He was assigned to RAF Brize Norton in July 2009 where he volunteered to deploy with 174 Provost Company, 3rd Regiment Royal Military Police as part of the Theatre Provost Group. During his pre-deployment training Corporal McCarthy showed an aptitude for mentoring and was a natural choice to embed with the Welsh Guards as part of the Police Mentoring Advisory Group.

"Brent was a loving sensitive young man. He excelled at sport and had the whole world in front of him. He loved his family dearly and will always be a hero to his niece Miajay. Brent will be sadly missed not only by us but also by his loving partner Sarah and her devoted family. Life will never be the same for any of us. We will love you always. God bless."...

Lance Corporal Davies deployed to Afghanistan on 21 March 2012 as part of a Police Advisory Team within the Police Mentoring and Advisory Group. He was based in Patrol Base Attal in the Lashkar Gah District of Helmand Province.

Lance Corporal Davies was born on 15 October 1984 in Carmarthen. After school he was self employed before starting his career at the Infantry Training Centre Catterick in October 2009. He successfully passed out from Catterick in April 2010, joining the Welsh Guards.

On 10 May 2010 he was posted to 1st Battalion Welsh Guards at Lille Barracks in Aldershot. During his time in the Battalion he quickly stood out as a natural leader and he was selected to attend the Lance Corporal promotion cadre, subsequently promoting in December 2011.

Lance Corporal Davies was an exemplary member of the Welsh Guards. He was an extremely popular and respected member of his company and platoon. A gifted junior non-commissioned officer, he had earned the respect of all he worked with.

Lance Corporal Davies had a bright future ahead of him - his professionalism, leadership and unswerving sense of duty would have carried him far. He will, justly, be remembered among the ranks of the bravest of the brave.

The family are devastated at the loss of Lee and wish to be left alone to grieve at this time.

"Lance Corporal Lee Davies loved being a soldier - it was who he was. He passed out from the Infantry Training Centre Catterick in April 2010. He swiftly made a name for himself for his enthusiasm, fitness and professionalism as an infantry soldier and in less than two years was promoted to the rank of Lance Corporal.

"To have made such a profound impact so early in his Army career speaks volumes about the quality of the man we have lost today. Lance Corporal Davies was very much the up and coming Junior Non-Commissioned Officer; he had big plans and the personal qualities to make his ambitions a reality. He was a sports fanatic, both watching and playing and would throw himself into any outdoor activity.

"His passion for motor-sports would see him up until all hours to watch a rally or a grand prix. In his personal life Lance Corporal Davies was a live wire who enjoyed nothing more than a night on the town. He was the living embodiment of the Army's work hard, play hard ethos.

"On duty he was a consummate professional; whether 'strutting his stuff' on public duties in London or on operations here in Afghanistan. It is in Afghanistan that the depths of his talents became obvious to all.

"He was a formidably talented team commander, in his element in this complex and unforgiving environment. The Welsh Guards have lost a man of inestimable promise, a fine Guardsman who lived and breathed the values and standards of the Foot Guards. He will be missed by all of us. Our thoughts and sympathies go out to his family."...

Go here, spend time and learn how these Fallen Heroes lived, in the words of those who know and love them the best.

Always remembered. Always honoured.
Posted by The Brat at 7:08 AM