Justice I can believe in! From Homeland Security NewsWire: 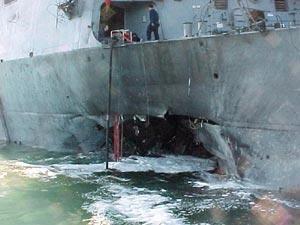 A U.S. drone fired a missile which killed Fahd al-Quso, 37, an al Qaeda operative who was sentenced to ten years in prison in 2002 for his role in the bombing of USS Cole. The 2000 attack on U.S. Navy ship took the lives of seventeen American soldiers and injured thirty-nine.

Al-Quso escaped from a Yemeni prison in 2003. He was on the FBI’s most wanted list, with a $5 million reward for information leading to his capture. He turned himself in to the Yemeni authorities in 2005, and served two more years in prison. He was released in 2007.

The Guardian reports that one, and possibly two, more al Qaeda operatives died in the missile attack on a car they were driving in the Wadi Rafad valley in the country’s southern Shabwa province.

Al Qaeda admitted the death, saying in a statement: “Al-Qaida affirms the martyrdom of the Fahd al-Quso in an American attack this afternoon in Rafad.”...

Read the rest here. Follow the link to the Guardian article for more interesting stats.
Posted by The Brat at 4:19 AM