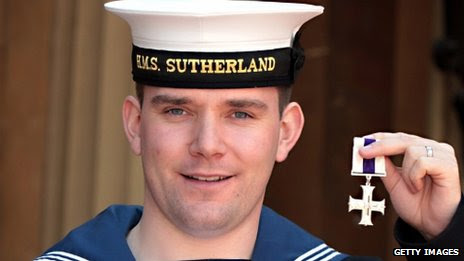 A Devonport-based Royal Navy medic has been awarded the Military Cross for his bravery in Afghanistan.

Liam O'Grady saved the lives of four colleagues after a grenade attack, despite being wounded with shrapnel himself.

The 22-year-old medical assistant, who lives in Plymouth, was presented with his medal by Prince Charles at Buckingham Palace.

"I told him it was a job that needed to be done, so I did it," MA O'Grady said. [Yes, emphasis mine]

The HMS Sutherland medic was attached to an Army patrol in the Upper Gereshk Valley last year when the attack happened....

Read the rest of this absolutely heroic story here.