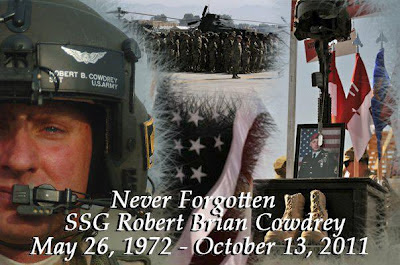 Today being Memorial Day in America, it is really timely that in Afghanistan, my 'nephew' SSG Brian Cowdrey has been remembered as an American Hero at a ceremony held at FOB Fenty:

On Memorial day many people visit memorial sites and cemeteries to honor those who have died serving our great country. Today the Soldiers at Forward Operating Base Fenty, Afghanistan are honoring a fallen hero and dedicating a helicopter ramp in his memory.

JALALABAD, Afghanistan – There wasn’t a BBQ with friends. No kids splashed in a pool or lined up for a rollercoaster on the official first day of the “summer fun” season. No-one got the day off. Memorial day wasn’t anything except a day to gather and remember, mark a patch of concrete with a small monument, and lament losing a friend.

On October 13th, 2011, Castronovo’s MEDEVAC unit responded to an urgent call from a small observation post in Kunar province, near the Pakistan border. The post had been under heavy enemy fire, and three Coalition Soldiers were critically wounded, requiring evacuation.

Among the medics on board was U.S. Army Staff Sgt. Robert “Brian” Cowdrey, from Atwater, Ohio. Cowdrey was seasoned combat veteran on his fourth deployment, known for his “hard right over easy wrong” attitude.

As crews raced to rescue the wounded, weather deteriorated as the number of patients increased. The Task Force Talon, 82nd Combat Aviation Brigade MEDEVAC crews made the decision to continue on, despite dangerous, rugged terrain and limited visibility. Rain showers soaked the valley they traveled.

“U.S. Soldiers fought side-by-side with their Afghan counterparts. What happened at OP Shal wasn’t about politics, foreign policy, or ethnicity,” said Castronovo, of Woodland Hills, Calif. “These Soldiers were fighting for each other’s lives.”

Cowdrey jumped from the helicopter as soon as the pilot got two of three wheels on the ground, and ran to find the wounded. The helicopter delicately balanced on the side of the mountain, the whirling blades of the main rotor just a few feet from the ground.

“When it came to the wounded, it wasn’t about the uniform or the country of origin- for Brian, it was about helping another human being,” said U.S. Army Staff Sgt. Deane Bostick, a flight medic who was with Cowdrey that night.
Cowdrey loaded the two most critically-wounded patients onto the Black Hawk, then asked for permission to go back and get more.

“Brian didn’t have to go back,” said Castronovo, “but leaving a wounded Soldier behind never crossed his mind.”

“I was with Brian the night he left us,” said Bostick. “The last thing I said to him was ‘be safe,’ and with a crooked smile he responded with the same, and then he was all business.”

On his way back with yet another patient, Cowdrey was struck by one of the low rotor blades, killing him instantly.

“A ground medic who witnessed the events told me ‘as Brian moved to the aircraft with the third patient it appeared he pushed the patient to safety before being mortally wounded,’” said Bostick. “I would like to think that was the case; that his last act in life was to ensure the safety of another. That is who he was.”

“Brian gave his life while in the service of others,” said Castronovo to a crowd of commanders, MEDEVAC crew members and pilots collected in front of a sheet-draped memorial just off the main runway on Fenty. “He died doing what he loved most and I know in my heart that he wouldn’t have wanted it any other way. Brian laid down his life out of love for his brothers.”

To honor Cowdrey’s life and sacrifices, the MEDEVAC crews serving with Task Force Saber in Jalalabad dedicated FOB Fenty’s V.I.P. landing pad to Cowdrey, and marked the site with a memorial- a simple marble plaque atop a pedestal of concrete.

“I will never forget you, nor will anyone else who was fortunate enough to have known you,” said Bostick. “I am humbled to have known this man and think it only appropriate that here at Jalalabad Airfield the V.I.P. pad be named in his honor, forever to be known as ‘Cowdrey Pad.’”

“Sometimes, I think about how many lives Brian affected,” said Castronovo. “I try to count how many mothers, fathers, sisters, and brothers can embrace their loved ones because of Brian’s actions? How many family trees will continue to grow because Brian saved lives? Brian’s impact is immeasurable.”

SSG Brian Cowdrey: "Who Shall I send?"

Music and Me: For Brian

Fighting for a Life; Fighting to Bring Home Every Body He Could
Posted by The Brat at 4:03 PM