"Dustoff": When Lives Change in a Heartbeat 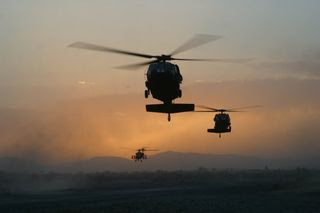 "Dustoff:" When Lives Change in a Heartbeat

It takes a special person to be a Medic or Corpsman, as the Navy calls them. When the bullets pierce the air ahead of their own sounds, lives are changed in the instant, and it is the Medic who tries to mitigate the changes when the bullets hit their mark. It is a Medic who must decide who he might be able to save, who must overcome the Human instinct to fight back, to fight for life, and must live with the decisions.

Often, the Medic walks the same trails as the Infantry, but he's a different breed. He is revered by those that do the fighting. And fiercely protected. He is loved by his men, and trusted. He is not expected to do the fighting. He may harass you for being a crybaby while he treats your blister, but he'll do his best to keep you ready for the fight. The Medic will know more about his men than will the Platoon Sergeant.

And with the introduction of the Helicopter came a new breed of men: DustOff. These Medics rush into the Gates of Hell, with one purpose: to save as many lives as the combination of man and machine makes possible. These men fight to get to the battle, to make decisions no one wants to make, to save as many men as possible, to preserve lives within that "Golden Hour." It is DustOff, heli-borne medical evacuation, that is more responsible than any other factor, for the very low fatality rate in modern war. It is DustOff, along with advanced medical facilities far forward on the battlefield, that save lives. It is DustOff, along with those medics on the ground, with their men, that begin treatment as soon as the wound occurs.


Recently, I had the opportunity to discuss these missions with one of their own....

War on Terror News has much more, based on information given to him by SSG Cowdrey.

A MUST READ, here.

Email ThisBlogThis!Share to TwitterShare to FacebookShare to Pinterest
Labels: Dustoff by WOTN and SSG Cowdrey