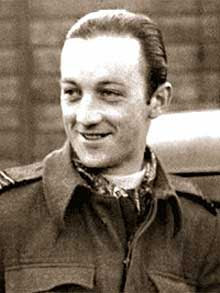 From the Warsaw Business Journal:

Brigadier General Tadeusz Sawicz, the last surviving Polish pilot among the 144 who fought in the Battle of Britain, died on October 19, 2011 in Toronto, Canada. He was 97.

He was born on February 13, 1914 in Warsaw. After finishing high school, he enlisted in the army in 1933. A year later, he joined the Aviation Cadet School in Dęblin and served for three years in an air regiment in Warsaw.

Mr Sawicz was also the last surviving officer of the Pursuit Brigade, which defended Warsaw against the German air force, the Luftwaffe, in September 1939. He fought against the Luftwaffe flying PZL P.11c fighter planes.

On September 14, 1939, he flew his plane to the besieged capital, bringing orders from the Polish army's commander-in-chief to the commanders of Warsaw, according to the website of the Polish Air Force.

After the fall of Poland, Mr Sawicz escaped through the south of the country to Romania before heading to France, and then on to Britain. He arrived just in time to fight in the Battle of Britain, which took place between July 10 - October 31 1940.

He commanded all three Polish fighter wings in the Royal Air Force. In 1941, he organized the 316th Warsaw Squadron, which flew Hawker Hurricanes...

From the UK Telegraph:

When the Germans invaded his homeland, Sawicz was serving in Poland with the 114 Fighter Flight of No 1 Air Wing. On September 1 1939, despite flying an antiquated biplane fighter, he damaged a Messerschmitt Bf 109. On September 5 he was appointed a deputy commander of his squadron, and over the next few days was credited with destroying two enemy bombers and damaging two more.

On September 14 Sawicz flew from an airfield in south-east Poland to Warsaw, by then encircled by the Germans, carrying orders for the defence HQ from the C-in-C Polish Armed Forces. He landed under heavy fire and, after completing his task and repairing his damaged aircraft, he took off the next morning, again under fire. ...

There is much more about this Hero, and yes, it is a MUST READ, here.

Brigadier General Sawicz died in Toronto, and the CBC has the news, too.