Gilad is home: What the media did NOT show you 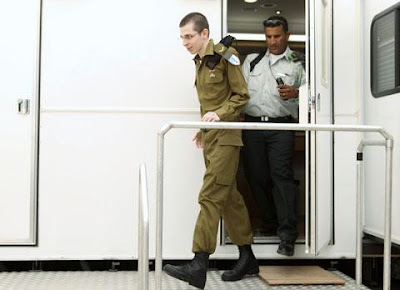 We all rejoiced when we saw pictures like this yesterday, and the msm covered this good news story. As is usual, the msm manipulated what we all saw. As is also usual, all was not as it appeared.

Israeli Soldier's Mother - as always - has the real goods:

I've spent most of the day watching and listening to the news as Gilad came home. It was an interesting day, accompanied most of the way by fellow Twitter friends, people in the store, my family. We watched as there was a glimpse of Gilad finally leaving Palestinian hands for Egyptian ones.

He looked so weak. He walked so stiffly. They pulled at him and I wanted to scream and tell them to get their hands off of him. His body language was clear - he looked bullied, almost indifferent. It was as if he had gone somewhere else and only his body was there, doing what the Palestinians were telling him to do. Move this way; walk this way. Stand here.

More time as we wait...and then an interview with an Egyptian woman. I won't waste the word "journalism" on her. The interview was a shock to Israel, as it was unplanned on a day when everything was supposed to be scheduled carefully.

Worse, the interview was asinine and rude. Anyone could see that Gilad was not well. ...

More op/eds out of Israel; you know, the people most impacted by the recent decisions:

Israel Will Find It More Difficult to Justify Ban on Hamas

Go read all those links. Pay attention.
Posted by The Brat at 5:54 AM