Especially if you're a Brit! 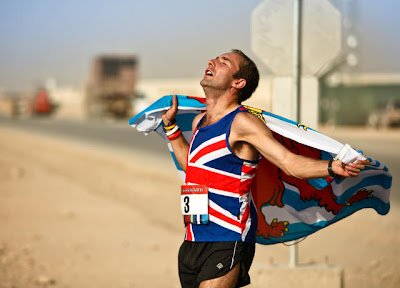 10/30/2011 - British Army Capt. Frazer Alexander, a vehicle maintenance officer with The Queen’s Dragoon Guards, hobbles away from the finish line of the Marine Corps Marathon Forward at Camp Leatherneck, Afghanistan, Oct. 30, 2011. Alexander was the overall winner of the marathon and finished in 2 hours and 49 minutes. More than 300 coalition service members participated in the 26.2-mile marathon, which has been held annually aboard Leatherneck since 2009. The race is a satellite edition of the Marine Corps Marathon in Washington, D.C., one of the most popular marathons in the U.S. (DoD photo by Cpl Bryan Nygaard, U.S. Marine Corps/Released)
Posted by The Brat at 11:31 AM