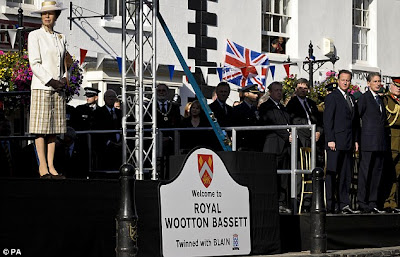 Princess Royal delivers tribute on behalf of the Queen

Thousands lined the streets of Wootton Basset yesterday as the town came to a respectful stand-still for the last time – as it was officially and royally re-named.


And instead of gathering to pay their respects to a repatriated member of the armed forces, this time it was Royal Wootton Bassett’s turn to be honoured.


The Princess Royal officially bestowed the new name on the town and delivered the Letters Patent on behalf of the Queen, recognising the community's role in honouring members of the armed forces who died while serving abroad.

After an initial march of military veterans holding flags aloft, a second parade took place - with its 355 steps representing every soldier who had been repatriated through the town.


The town became famous as thousands of people began to turn out to pay their respects to the fallen servicemen and women who died in Iraq and Afghanistan who had been repatriated at nearby RAF Lyneham, starting in April 2007...