Poor Julian Assange just can't seem to catch a break these days - and he is blaming it all on those nasty corporations, and banks.

Today, he held a press conference in London to say that Wikileaks is suspending their operations temporarily, because they are broke.


We are forced to temporarily suspend publishing whilst we secure our economic survival. For almost a year we have been fighting an unlawful financial blockade. We cannot allow giant US finance companies to decide how the whole world votes with its pocket. Our battles are costly. We need your support to fight back. Please donate now. (here)

If you really must, go to the link above (that's Wiki's site) and watch the video of Assange telling how Wikileaks needs YOU!

In case you have been living under a rock for the last few years, Wikileaks is the group who have endangered many lives by their cavalier release of classified information, both military and political.

As Wake Up America wrote back in November 2010: 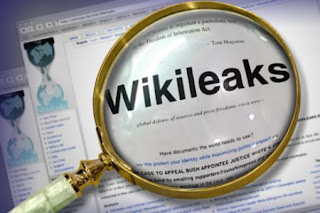 Major newspapers throughout the world released the first wave of information from the largest U.S. Military leak in history, which they obtained from WikiLeaks founder Julian Assange, who has also put the some odd 250,000 leaked cables on the Wikileaks site, despite the site having gone dark and made inaccessible earlier today from supposed DOS attacks.

Wikileaks is believed to have illegally obtained these cables from a former intelligence analyst, 22 year-old Bradley Manning, who has been held in solitary confinement awaiting court martial. He has been charged with charged with unauthorized downloads of classified material while serving on an army base outside Baghdad.

More on that at The Guardian.

The White House appealed to Wikileaks not to release these documents, stating it would put countless lives at risk and jeopardize relations with our allies, but to no avail, Assange was determined to released the secret cables...

Read the rest of that here.

In October, 2010, War on Terror News had a column on Wikileaks:

WikiLeaks was established back in 2006 by Julian Assange, "a man with a near genius IQ" say some. According to the NYT's Assange redefined "whistle-blowing by gathering secrets in bulk, storing them beyond the reach of governments and others determined to retrieve them, then releasing them instantly, and globally."

On October 23, 2010 the NYT's described Julian Assange as a "hunted man" who is in such fear of our intelligence agencies that he can barely be heard when he speaks to others. He resorts to encrypted cell phones, fake names, cash only transactions, trusting nobody, not even his once loyal followers.

Oh how the mighty have fallen......I am more than pleased at his sudden change in lifestyle! He is a RAT of the lowest kind!

Under the guise of exposing the dirty little secrets of our military actions in first Afghanistan and now in Iraq, Assange has exposed countless men and women to harm far greater reaching than he ever anticipated. He most likely feels the world has a "right to know" what goes on behind the veil of "confidentiality"

So where is the harm? After all any names that were deemed important were removed....or at least they tried to remove them all. "The harm" is in providing a whole bucketful of looks inside our operations, movements.....basically giving the enemy bits and pieces of "our playbook!"

There is no timeline on when this information will no longer be useful to our enemies.

Let's not forgot about PFC Bradley Manning who is currently in the brig at Quantico, VA. He is "suspected" but not convicted....yet, of providing Assange with the information that has been leaked. PFC Manning was in a perfect position to betray his country, working in Army intelligence. ...

You know WOTN has more, here.


What about Bradley Manning? Wikileaks at one time was supposedly supporting him financially. From Wired:

WikiLeaks has finally made good on a months-old pledge to contribute financially to the defense of 23-year-old Bradley Manning, according to a group raising money for the imprisoned Army private suspected of providing WikiLeaks its most important U.S. releases.

But the sum, $15,100, is less than half the $50,000 WikiLeaks originally promised. It’s also less than the group pledged in December, when WikiLeaks spokesman Kristinn Hrafnsson said WikiLeaks would immediately transfer $20,000 to Manning’s defense fund.

The Bradley Manning Support Network, which expressed frustration last month that it had not received the promised pledge, praised WikiLeaks’ contribution Thursday. ”This donation from WikiLeaks is vital to our efforts to ensure Bradley receives a fair, open trial,” wrote Mike Gogulski, the network’s founder, in a press release....

Not content with publishing military classified information, Assange and Wikileaks then went on to publish diplomatic cables, which caused more than a few red faces in the global community.

I also recently wrote about Wikileaks endangering the lives of Iraqi Jews.

Today, The Christian Science Monitor has this:

Secrets are safe as WikiLeaks, starved of funds, halts operations

WikiLeaks will not release any more secrets until it can raise enough money to keep going, according to the clandestine group's website. It has been choked by financial institutions that no longer process online donations to WikiLeaks.

Call it "the empire strikes back" – against WikiLeaks.

The self-described anticensorship website announced Monday that it is calling a halt to releasing secrets until it can raise enough money to keep its operation going. On the WikiLeaks website, its operators declared it to be the victim of a "blockade" by financial institutions that refuse to process online donations to the organization.

"We are forced to temporarily suspend publishing whilst we secure our economic survival," the website said. "For almost a year we have been fighting an unlawful financial blockade. We cannot allow giant US finance companies to decide how the whole world votes with its pocket. Our battles are costly. We need your support to fight back. Please donate now."...

CSM has a lot more, and it is well worth the read, here.


Wikileaks has caused major damage around the world, and endangered many lives. Along the way, Assange has whined about a world-wide conspiracy against him and his group, even as major media colluded with him to release the document dumps that HE decided the world had a right to know - needed to know.

'All memoir is prostitution' says the WikiLeaks founder with the £1.2 million advance.

The story of how Julian Assange, the Wikileaks founder, became the first man in history to write an unauthorised autobiography will make a great chapter in his authorised autobiography, should he ever reach an agreement with himself to write one. I’m sure he will because you can’t really call yourself a celebrity these days unless you have at least a couple of autobiographies under your belt, preferably before you reach your thirties....

I’d like to be able to reveal that Julian Assange angrily disowned his memoir (the one he got a £1.2 million advance for) on the grounds that it was badly written by his ghost, but as with every other aspect of his mercurial life, it is not that simple. In fact, it is so complicated that I’m not sure I can summarise it here. I’m pretty sure it involves money, though. Indeed, his only significant comment on the subject has been to say that “all memoir is prostitution”....

I am guessing that Assange is having to rethink just what he is willing to do to raise funds for his ongoing crusade as self-proclaimed champion of the peoples' right to know!

It is safe to say that there are many who won't be shedding any tears for this latest turn in the tides of Assange and Wikileaks' fortunes or 'misfortunes. '

For now, I guess we can say that sometimes silence IS golden.

Has anybody told Bradley Manning yet?

Oh, and one more thing, about that Wikileaks logo?

Is this Wikileaks logo a rip-off ?

Although they are too similar, I’m sure it’s not on purpose and the second logo is just the same by coincidence. Just two common ideas. Why I think so ? Because if you are man of truth , a man who has principles you’ll never rip off a logo. And the Wikileaks are men of honor, right ?...

And the Wikileaks are men of honor, right ?... Riiiiiiiiiiiight! 'Nuff said!

Men of honor. *snort*
Poor Julian. I'll mail a box of tissues to you.

Be careful of who you sh*t on.....what goes around comes around!

Sympathy? Not in the least!!