Panetta: “...the unshakeable commitment of the United States to the security of Israel.” 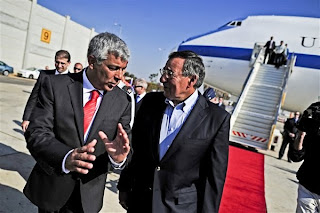 TEL AVIV, Israel, Oct. 3, 2011 – The people of Israel can be confident in America’s enduring commitment to their freedom and security, especially during this time of dramatic change in the Middle East, Defense Secretary Leon E. Panetta said today.

On the first day of his first trip as defense secretary to meet with key allies in the Middle East and to visit NATO headquarters in Brussels, Panetta and Defense Minister Ehud Barak held a joint news conference in the circular, glass-walled lobby of the Kyria, the central command base of Israeli Defense Forces.

“The political shifts taking place in this region present both challenges and opportunities to Israel and the United States,” Panetta told an international group of reporters in the sunlit room, “but make no mistake, we will face these challenges together as allies.”

After the news conference, Panetta met with Mahmoud Abbas, president of the Palestinian National Authority, at his office in Ramallah, a Palestinian city in the central West Bank.

Later in the afternoon, the secretary and his delegation visited the Jerusalem office of Prime Minister Benjamin Netanyahu for more discussions, then laid a wreath nearby at the Holocaust History Museum, called Yad Vesham.

During a productive set of morning discussions with Barak, Panetta said, he reaffirmed “the unshakeable commitment of the United States to the security of Israel.”

“Thank you, the [Obama] administration and the American people for the continued support and backing of Israel security in this tough neighborhood,” Barak, an old friend of Panetta, told the secretary....

The words 'talk is cheap' spring to mind here, but what do I know?!!~

Email ThisBlogThis!Share to TwitterShare to FacebookShare to Pinterest
Labels: Panetta on US commitment to Israel