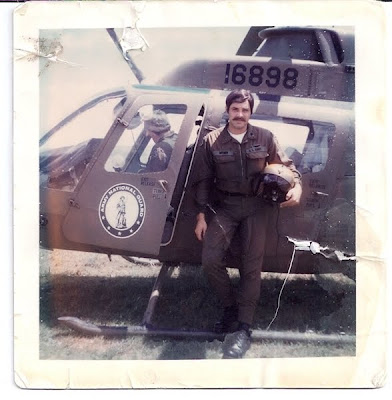 Army Chief Warrant Officer 5 Roy Brown, now serving in Afghanistan, stands with his helicopter in the early 1970s when he was Cobra pilot serving in Vietnam. Then, and now, Brown served with the 101st Airborne Division. Courtesy photo

Face of Defense: Vietnam Vet Still in the Fight

Brown, who also served in Operation Iraqi Freedom, began his career with the 101st Airborne Division, and is serving with the Screaming Eagles again as his career draws to a close. As the 159th Combat Aviation Brigade’s liaison officer to the Air Force’s 702nd Expeditionary Airlift Squadron, which supports Regional Command – South here, Brown is in no hurry to retire.

“Call it patriotism or call it my admiration of the Army’s principles -- its organizational objectives and goals, its performance over the decades in areas not only of military success, but what I think of as social equity,” he said. “But your life’s works need to have a higher purpose.”

Explaining how his career began, the Oklahoma native said it was a $5 bill that transformed his boyhood dream into reality in 1971.

“My mother asked me how I knew I wanted to be a pilot if I’d never flown, so I went to the local airport, paid $5 and rode in a Piper 140 airplane for about 20 minutes,” he said. “Then I walked right into the Army recruiting office and said, ‘Send me to flight school.’”

The recruiter told then-19-year-old Brown about a program called “High School to Flight School.” Still in his first semester of college, he knew flight school was a good opportunity, so he took it. His mother had reservations about him going to war, but knew that flight school was something her son would never be afforded any other way.

“He always wanted to be a pilot, even when he was a little boy, playing with [toy] airplanes,” his mother, Betty S. Terry-Schmidt, said. “It did not surprise me that he chose to be a pilot.”...

Thank you for your service, sir!