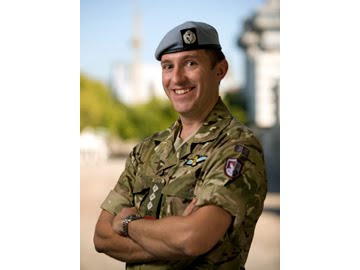 An Army officer is to receive the Air Force Cross for his 'selflessness and extraordinary professionalism' in piloting his Apache helicopter in dangerous situations to assist casualty rescue missions in Afghanistan.

Captain Steven Jones, aged 32, an Apache pilot with the Army Air Corps, was flying his helicopter back to base after a day providing protective air cover for ground troops in Afghanistan in December 2010 when he heard a radio call for assistance.

An infantry patrol had been caught in an IED blast, which had killed one soldier and seriously wounded several others. The explosion's blast had also disabled the soldiers' radios - except the one that communicates with aircraft.

Only helicopters in the air on the right frequency would have been able to hear the soldiers' transmissions. To be of assistance to the wounded soldiers, Captain Jones needed to keep his Apache in the air and relay their messages for urgent help.

Captain Jones' helicopter was dangerously low on fuel - the reason why he was returning to base. But, he said, the decision was an easy one to make:

"You can never leave a man behind. Yes, we were low on fuel, but that doesn't matter where there are lives at risk. On a balance of risk I worked out that we could try and get away with staying in the air for as long as we could.

"You would never normally do it - there are manageable levels set for a reason or you risk the engine stopping for example - but I couldn't not respond."...

Read much more on this Every Day Hero, here.

Thank you for your service, Captain Jones.