Bravo 22 takes over the theatre - in London's West End

A remarkable group of wounded, sick and injured Service personnel will star on the West End stage this weekend. Report by Lorraine McBride. 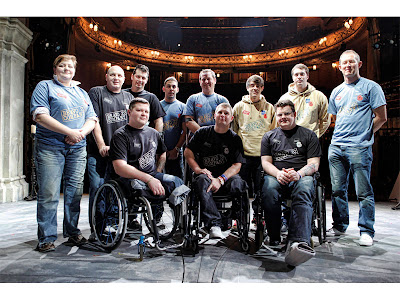 
They've all suffered brutal or life-threatening injuries, but a group of servicemen and women who paid a terrible price serving in Britain's Armed Forces are back firmly on the road to recovery, thanks to a theatre in the West End.

'The Two Worlds of Charlie F' is a Service person's view of injury and recovery. The play explores the consequences of both physical and psychological wounds, and the impact on others during the fight to win the new battle for survival at home while coming to terms with the cards that life has dealt.

Writer Owen Sheers interviewed each member of the newly-formed Bravo 22 Company and wrote his script by weaving in the personal experiences of the wounded, sick and injured troops who play theatricalised characters based on them. The result is a darkly comic, authentic and richly uplifting tale of survival.

One serviceman involved in the groundbreaking initiative is Marine Cassidy Little, 30, who lost his lower right leg when he was caught in an IED blast while on foot patrol in the Nad 'Ali district of Helmand province, Afghanistan, last summer.

Marine Little, a Canadian, who serves with 42 Commando Royal Marines, joined the Armed Forces as a challenge after leaving university in the US and moving to London. In the aftermath of the bomb blast, he told a young medic treating him, with gallows humour:

"There goes my dancing years!"

About a month into his recuperation at Headley Court, the Marine learned about the Theatre Royal Haymarket Masterclass Trust and their first project to work with wounded military personnel.

"I got involved because I thought it would be a good laugh and it's a distraction, because if I focus on the fact that my whole life has changed, it's difficult. I've had setbacks here and there but they don't seem as drastic as if I hadn't got this."

The Marine was instantly drawn to the Bravo 22 Company project because he always had a lust for the stage. Talented and gregarious, he landed the star role of Charlie Fowler after pouring out his story to Owen Sheers 'for about three hours', and the writer instinctively knew he'd found his leading man...

GO NOW and read the rest here, as our Troops prove - yet again - that there is NO theatre of operations they cannot conquer!!!