Some Gave All: Rifleman Sachin Limbu

It is with sadness that the Ministry of Defence must confirm the death of Rifleman Sachin Limbu, from 1st Battalion The Royal Gurkha Rifles, at the Queen Elizabeth Hospital in Birmingham on Monday 2 January 2012. 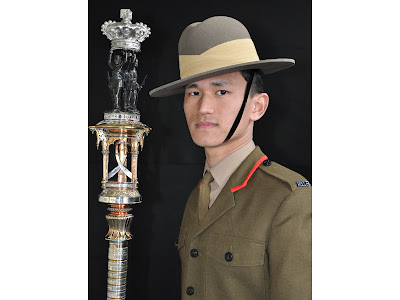 He died from wounds sustained while serving in Afghanistan in June 2010.

He was involved in a number of operations to stabilise the area of Walizi Village, many of which involved intense, protracted and close-quarter combat in an area known to present a high risk from improvised explosive devices (IEDs).

On 24 June 2010 his multiple deployed on a patrol to Walizi as part of an operation to enable Local National Freedom of movement and deter insurgent activity in the area. As this multiple reached its objective, an area characterised by frequent insurgent attacks, Rifleman Sachin moved into a fire position to provide protection to his comrades and was caught in an explosion from a hidden IED.

He was evacuated to Selly Oak via Camp Bastion. Rifleman Sachin died on 2 January 2012, in the New Queen Elizabeth Hospital, surrounded by his family.

Rifleman Sachin Limbu, aged 23, was born on 3 October 1988 and came from Rajghat, Morang in Nepal. His father was a Gurkha Senior Non-Commissioned Officer and Rifleman Sachin was brought up in the life and community of 7th Gurkha Rifles and later 2nd Battalion The Royal Gurkha Rifles in Hong Kong and Brunei.

He passed the rigorous selection for the Brigade of Gurkhas in 2007 and after the combat infantryman course in Catterick, joined 1RGR in Brunei where he conducted extensive jungle warfare training before moving with the battalion to the UK and undertaking training for deployment to Afghanistan.

"My wife and I are immensely proud of our only beloved son who has sacrificed his life for the good of others. Sachin was our only son and we both extend our sincere thanks to all the staff at The New Queen Elizabeth hospital and Brigade of Gurkhas who have supported us all so closely."

"Rifleman Sachin Limbu died in hospital with his parents at his bedside. Seventeen months earlier he had been terribly injured whilst on patrol in Helmand province.

"Since that time he had shown remarkable tenacity to overcome these injuries and had been an absolute credit to his regiment and his country; he made us all extremely proud to call him a brother in arms.

"Rifleman Sachin's sacrifice has prevented him from fulfilling a rewarding career but his inspiring determination not to succumb to his injuries for so long was in the true sprit of those Gurkhas who have gone before him. He was highly cherished and loved by his fellow Gurkhas and left his mark on all those that had the honour to meet him. As the only son of a retired Gurkha this will have been devastating for his family; our thoughts and prayers are with them at this difficult time."...

There is much more on Rifleman Limbu in the words of those who know and love him the most, here.

Rest In Peace, Sir. Your fight here is done.

Email ThisBlogThis!Share to TwitterShare to FacebookShare to Pinterest
Labels: Some Gave All Rifleman Sachin Limbu