US Election 2012: DoD Guidelines for Employees 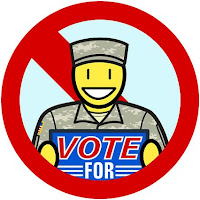 With election activity picking up, defense officials are in the process of issuing regular election-year guidance to remind military and Defense Department civilians that they’re subject to rules regulating their involvement in political activities.

Don’t quite understand all the jargon in the regulations outlined, here are the major “do’s” and “don’t's” regarding election time for service members and civilians:

- Civilian employees are free to engage in the vast majority of political activities.

- Civilian employees are also allowed to run for non-partisan office, make financial contributions to a campaign and attend political fundraisers.

- Civilian employees may not use official authority to interfere with election results, solicit or receive volunteer services from a subordinate, allow the use of their official title in political fundraising, host or sponsor a political fundraiser, or run for partisan office.

- Service members may join a political party; display a political sticker, sign or button; and vote.

- Service members may attend political rallies as a spectator, provided they are not in uniform, and may make financial contributions to candidates who are not employees of the U.S.

- Service members are prohibited, by law, from using official titles when participating in permitted political activities, and from soliciting or receiving volunteer services from a subordinate, soliciting or receiving political contributions, participating in partisan political management, campaigns or conventions (unless attending as a spectator not in uniform) or running for partisan office.

As there are a number of restrictions on the activities of military personnel and the rules are not always clear, the most prudent course of action is to ask before engaging in any political activity.

REMEMBER: care needs to be exercised to ensure that service members nor civilian employees act in a manner that would imply or appear to imply that political activities are endorsed or approved by DoD, according to the both the Hatch Act and DOD directives.