Been a busy week for the UK Navy...

Thirteen Somali pirates were captured on a dhow in the Indian Ocean on Friday by a combination of Royal Navy, Royal Marines and Royal Fleet Auxiliary personnel.

The capture took place as dawn broke on Friday 13 January 2012 and involved RFA Fort Victoria joining USS Carney to ascertain the business of the dhow, which had been identified as a vessel being operated by pirates in the shipping lanes of the Indian Ocean.

In a combined show of force, both RFA Fort Victoria and USS Carney manoeuvred towards the dhow with the intention of encouraging her to comply with the counter-piracy forces. This should have been intimidating, given the size of the two military vessels, but the pirates were determined to carry on with their activities. RFA Fort Victoria was tasked to take positive action to disrupt the progress of the vessel.

Despite these measures, the dhow failed to comply with repeated instructions to stop and verify her intentions. Immediately afterwards, Royal Marines in speedboats approached the vessel and successfully boarded it. The pirates surrendered as the Marines took control of the dhow.

13 Somali pirates were found to be on board together with a selection of weapons....

There is much more here. Great job!

Then there is this one, also from the MoD: 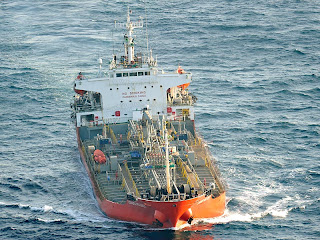 RFA Fort Victoria blocked an attempt on Tuesday by pirates to sail the hijacked tanker Liquid Velvet from the Somali coast into the Gulf of Aden where they would have used it as a mother ship to launch attacks on passing shipping. Greek-owned chemical tanker Liquid Velvet has been held to ransom since last November.

RFA Fort Victoria, which has Royal Navy force protection personnel on board, cut off Liquid Velvet's progress after she had sailed 90 miles (145km) from the coastline - forcing her to return to Somalia....

Email ThisBlogThis!Share to TwitterShare to FacebookShare to Pinterest
Labels: UK Navy and Pirates