Some Gave All: Private John King

It is with great sadness that the Ministry of Defence must confirm the death of Private John King of 1st Battalion The Yorkshire Regiment on 30 December 2011. 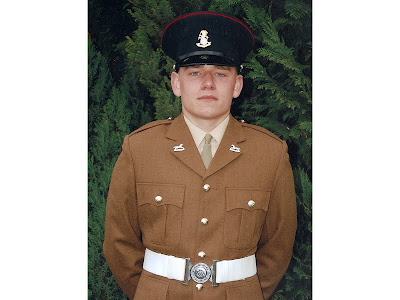 Private King was taking part in a partnered foot patrol with Afghan National Security Forces to increase security around the village of Llara Kalay, in the Nahr-e Saraj district of Helmand province.

The patrol had identified insurgents in the area and had begun to search and clear a number of compounds in the village. The Afghan National Army members of the patrol came under fire from insurgents and the International Security Assistance Force (ISAF) soldiers moved forwards to support them. During the firefight Private King was caught in the blast from an Improvised Explosive Device (IED) and was killed in action, despite the best efforts of medics at the scene.

Private John King, 19, from Darlington, joined the Army in 2009 and served with B(FAMARS) Company of 1st Battalion The Yorkshire Regiment. He deployed to Afghanistan as part of Combined Force Nahr-e Saraj (North), commanded by the Danish Battle Group, in October 2011.

After joining the Army Private King attended the Combat Infantryman’s Course at the Infantry Training Centre, Catterick, before joining 1st Battalion, The Yorkshire Regiment in May 2010, based in Oxford Barracks, Münster, Germany.

He arrived at the Battalion as it entered the rigours and demands of the training year and joined 5 Platoon, B(FAMARS) Company. He was further tested in the Mission Specific Training, which was part of the build up to his first tour of Afghanistan. After training was complete, he was transferred to 4 Platoon B(FAMARS) Company, and deployed to the district of Nahr-e Saraj (North) in Helmand Province. As an infantryman on the front line he played a pivotal role in the counter-insurgency campaign. He was also a friend to the local community and our Afghan partners, especially the local police, who considered him a brother-in-arms.

Private King leaves behind his mother, Karen, father, Barry, brothers, Ian and Stephen, and girlfriend, Kelly. He will be sorely missed by his family, friends, and all that knew him.

The family of Private King said:

"John was a tremendous son, brother and boyfriend. He was a devoted grandson, a loving family member, and a proud soldier who died doing a job he adored. He will be sadly missed by all his family, friends, and loyal German Shepherd dog Rex."

"Private King had been part of the 1st Battalion The Yorkshire Regiment for a little over 18 months – but one of the busiest 18 months in the Battalion’s recent history. From early on he was able to fit in quickly through a combination of hard work, grit, a willingness to endure difficult conditions and an irrepressible sense of humour. Always the first to volunteer for anything, he was one of B Company’s characters: someone who could be found at the front at work or play, and was hugely popular as a result. His cheeky smile – no matter what we were doing – is the thing we will miss most of all.

"Our thoughts and prayers are with his comrades in Afghanistan - who will today be resuming their efforts to improve security – but most of all with his family in Darlington. We will remember him."...

Go here to read more about this Fallen Hero.